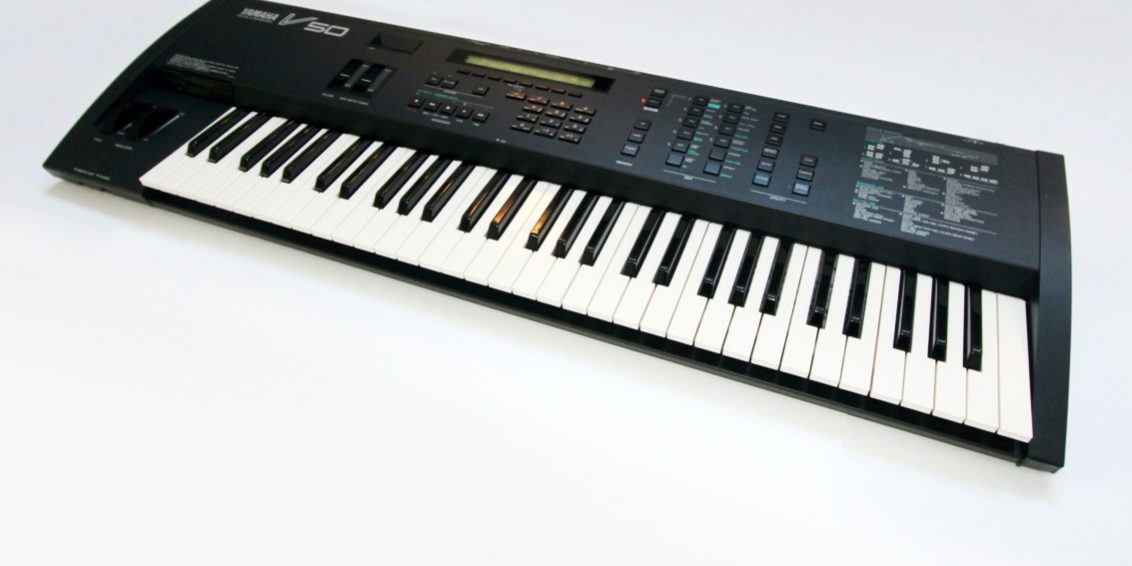 The V50 was the beginning of a V series, but ended as a one hit wonder.

Was the V-50 the beginning of something else?

By 1989, the DX family had reigned for seven years and the World was ready for Yamaha’s next big thing. In came the Yamaha V50, but it was not exactly what everyone expected as the successor to the DX7IIFD, and that’s because it wasn’t meant to be. The V50 is a 4-operator FM synthesizer, repackaged as a workstation with onboard effects.

The V50 was meant as an affordable workstation, and today it remains adffordably priced between $300 and $500 Aust. They were reasonably popular since consumers were very curious to own a new Yamaha synth that wasn’t part of the DX line. A mint specimen with disks, manuals and case will be over $500+

Yamaha had announced the V80FD as their new flagship, so when the V50 showed up instead, it threw a few people off. It looked kind of cool, with an onboard sequencer and disk drive, but it was still just a 4-operator FM synthesizer. The V50 was more like an ultimate 4-operator synthesizer, to satisfy the anticipation and gap before Yamahas’ next flagship. The V80FD however never came, because it was abandoned in favour of the SY77. And so the V50 remains with no relatives…..

New directions in design to set the stage for a new generation.

We remember seeing the V50 when new, and recall that it had a nice design that was suitably different and more modern than it’s DX predecessors. Although different it was still rather restrained, with elements such as the screen, sliders and bender wheels all borrowed from previous synths. Today we don’t find the V50 to be as neat as we thought. It’s not a synthesizer that says in any way that it is unique or innovative. It has a slight curve in shape to usher in a new era but other than that it feels kind of average.

The V50 makes a brave break from the flat, straight and linear forms of the DX synths. It has a curve on its profile that runs the full length of the unit. This soft curve is subtle yet distinctive at the same time. It’s possible that this curve was meant to slenderize a rather thick profile.

The V50 is not slender compared to other a 4-opertor synths, and that was possibly due to the additional gear it required to make it a workstation. You can sense how thick this unit is with the distance from the main control surface to the keys. It’s a vertical drop of almost 1 inch.

The main front panel is one sheet of metal painted in charcoal grey, a break from the usual DX black. Apart from one numerical keypad all buttons are perfect squares.

One of the more distinctive design features is the way the left end panel is cut in with flat surfaces for the pitch wheel and disk drive access. It’s a sculptural gesture that imagines the entire machine to be a singular shape with carved out parts.

Yamaha was never going to risk bad impressions with their first of a new generation. The V50 was therefore built from the usual high-grade metals and plastics. The main panel is smooth with a paint finish that looks like plastic but then when you touch it you realise it’s a reasonably thick sheet of aluminium. We haven’t seen many with dints and this suggests that the slight curve in the metal adds additional rigidity to the structure.

The sliders, screen and wheels were tried and approved components of previous models, so they are as sturdy and reliable as you’d expect from Yamaha.

The screen could have been larger, but then again this is not a flagship model. It’s interesting too that the screen is positioned so close to the top edge.

There are plenty of buttons but take a while to navigate as they are organised differently to those on DX instruments. An alpha dial would have really helped, and it seems unfortunate that Yamaha could not get one in given that gave one to the SY77 launched not so long after.

The buttons don’t feel as good as those on the DX7II synths, but we appreciate that they are at least larger than those on previous Yamaha 4-operator synths.

The V50 is a lonely synthesizer that longs for its still born V80FD brother. Sadly, we think the V50 will be forgotten in time. It doesn’t scream out with good looks, innovation or sound. At around $500 you can also find better value on the second hand market. Even if you could find a mint specimen, there is still the question of what to do with something neither cool or collectible.

The V50 is one of the first synthesizers we’re a bit short on words for, it’s nice but nothing special. There’s no real reason to own one, unless you originally had one and want to rekindle memories with it. Other than that, its just an average looking workstation from 1989.

The original V50 Manual is thick.

Yamaha had 3 soft cases that suited the V50. We believe that it shared the same cases as used on the YS synthesizers. The one shown here on top was a simple affordable canvas bag that we have not seen in any trade literature but believe it was exclusive to Japan. The middle on is the SC-YS1 soft case with ribbed sides. The bottom one is the LS-YS1 semi-hard case that also had ribbed sides.

The LS-YS1 semi-hard case had a more leather like texture in the vinyl.

In Japan the V50 had a larger size brochure, but still used an end view to emphasize the curved shape of the V50.

The sound disks are very rare and here are the only two we know of.