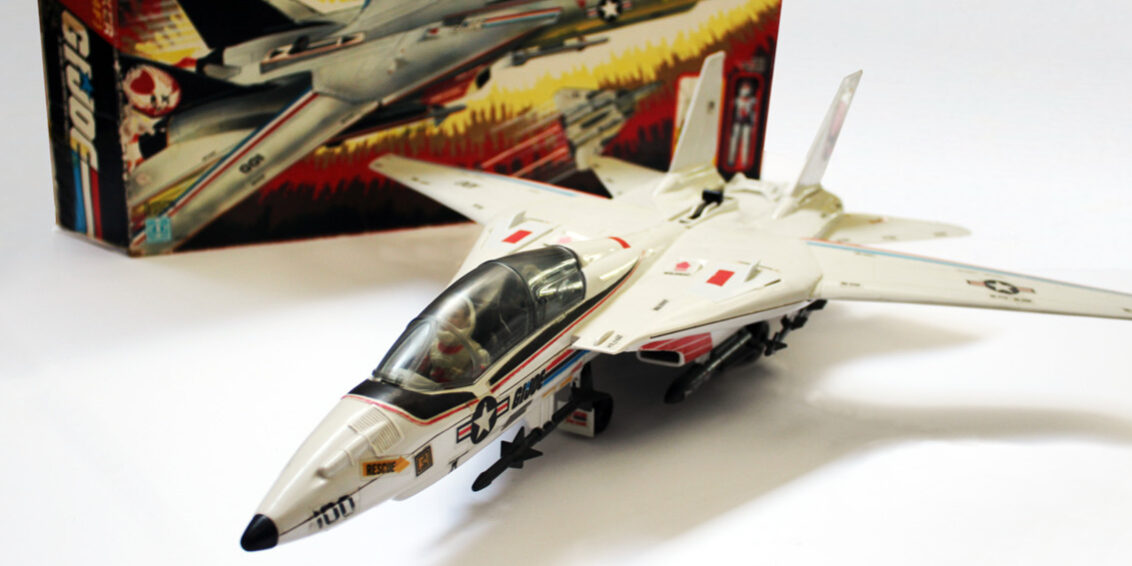 So cool, and to think that this is almost 40 years old!

G.I. Joe 3.75 action figures were the second generation of G.I Joe toys that ran from 1982- 1994. The Skystriker was one of the bigger G.I. Joe toys made and sold by Hasbro from 1983-1986. Designated numerically as the XP-14F this combat craft was clearly based on the real-life USA F-14 Tomcat Jet fighter. This Skystriker came with an action figure pilot known as Ace.

The Skystriker was very popular and sales were possibly boosted by the launch of the Top Gun movie in 1986. At any given time, there are always quite a few to consider on the second hand market. Complete toys range from $100-$200 US depending on condition. Mint ones with good original boxes can be several hundred dollars, possibly up to the a grand if the box is still sealed.

G.I. Joe toys are considered to be the most collected action figures in the World with origins dating back to the 60s with their 12inch figure line. The 3.75 action figures were inspired by the success of the Star Wars figures, but with additional articulation at the elbows and knees.

For a Toy that is now almost 40 years old, it still impresses. Measuring 23 inches from nose to tail the Skystriker was and still is a big toy. It was for the G.I. Joe toys what the Millennium Falcon was to Star Wars toys. The level of detail was incredible for 1983, and we remember seeing this in toy stores when new and being amazed. Even non G.I.Joe fans would be seduced away from the Force to consider this toy. The box is beautiful, the toy is big and proportionately resembles the iconic F-14 Tom cat jet fighter which was USA’s top jet fighter of the day.

Shall we play G.I. Joe or Top Gun?

Although it’s clearly a toy, it looks almost like an accurate scale model jet fighter. Unlike Kenner’s Millennium Falcon from 1977 which was proportionally compromised to fit its figures as well as toy shelves, the Skystriker very successfully resembles a real F-14 tomcat, without being too big. The main body colour is a warm grey, and this helps to define it as a toy rather than a scale model. Overtime some have discoloured to a light beige. The lever switch located in the centre is another giveaway that this is a toy and we think it probably could have been rethought to be more discrete. The choice of red and blue colours in some of stickers help to define this as “American”, since the slogan was “A real American Hero”. In fact, there are a lot of stickers that would have taken forever to apply, with clear attention into what makes a jet fighter, a jet fighter- are there really that many “NO STEP” labels everywhere in real life?

The underside was equally impressive with a lot of fire power.

Even the Phoenix missiles had stickers

Removable panels for maintenance was kind of unnecessary but allowed for extra play time.

The main body is made from a high-grade hard plastic and apart from discolouring with age, many will have survived quite well. The stickers however do tend to scuff, fade or lose their adhesion. Some have also been known to go tacky with a bad smell. With so many small stickers that would have been applied by kids (not always so accurately or straight), it’s hard to find a used Skystriker with good stickers. The front nose tip is made of rubber, which serves as protection for both toy and user. We like that even the tires are made from real rubber and have writing detail on them. Overall, this toy is very well assembled with visible screws located only on the underside.

The biggest selling feature of this toy were its swivel wings which can be controlled by a large lever centred on the top side. The landing gear operates at the same time which we think limits the play experience and would have preferred to have the wings and landing gear independent of each other.

The cockpit fits two and with only one action figure included, kids had to find Ace a co-pilot. The seats are removable and behind the rear seat is a parachute. The chute and strings naturally are hard to fold up neatly and store away. The canopy with its slightly smoky tone is cool but can be troublesome to open and close. Many break at the hinge, and we think it would have been nice if the canopy could actually hold in the open position.

The fire power of this toy was impressive and also accurately reflected the real deal. Sparrows, Side Winders, and Phoenix missiles easily clip on and pull off.

If you were to only choose one vehicle from the 3.75 inch G.I. Joe series it would have to be the original Skystriker. Many rate it as the number one toy from the G.I Joe toy line in regards to both desirability and collectability. Prices are continuing to rise and this may be a last period in time to secure a really clean example. Make sure its complete with Ace, his parachute and all correct original Missiles. The landing gear and swivel wings features should work. Missing stickers are to be expected but watch out for broken canopy hinges, missing fins on missiles, and the hinges and cover panels over the landing gear is prone to damage.

We would recommend finding one with its box because the box itself is a thing of beauty. Unlike the Star Wars vehicles and ships that had pictures of the toy itself, the Skystriker had a unique comic book like illustration on the box.

Curiously the Pilots outfit looks more like a space suit than a proper jet fighter pilots’ outfit. The clear part of his helmet is removable.

This is an interesting review in the sense that the design itself is not at all original since the fighter is based on a real life plane. However the idea as a toy is still original, and the transitioning of the design from Real World to Toy World was well executed. It’s a toy that can be played as part of the G.I Joe universe, Top gun movie, or another make believe scenario based on Earth. We applaud this toy for its ability to inspire imaginative play.

The Skystriker remains one of the most highly desirable vehicles of the G.I Joe toy line and is highly prized to collectors today. For G.I. Joe fans it is a clear must have, but even for other collectors it is a toy to be respected for both quality, design and playability. Even till now there is nothing else around that can give you that Top Gun Maverick and Goose experience. Hasbro and since released newer variants and special editions of this toy, but it’s hard to substitute the original.

“A real American Hero”, according to Hasbro and G.I. Joe.

Takara had the license for the Skystriker, and sold it with all different packaging.

There were a few variations in the plastic molding near the nose and the tail. We don’t have all of them to showcase but you can see them at this link

I recall seeing this toy for the first time on a visit to California in 1983. Growing up in Thailand, I had never heard of G.I Joe before yet this toy was mesmerizing. The graphics on the box were exciting and the toy itself looked so real like the USA F-14 Tomcat, my favourite jet fighter of all time. Naturally I had to have one even though I had no idea who or what G.I.Joe was.