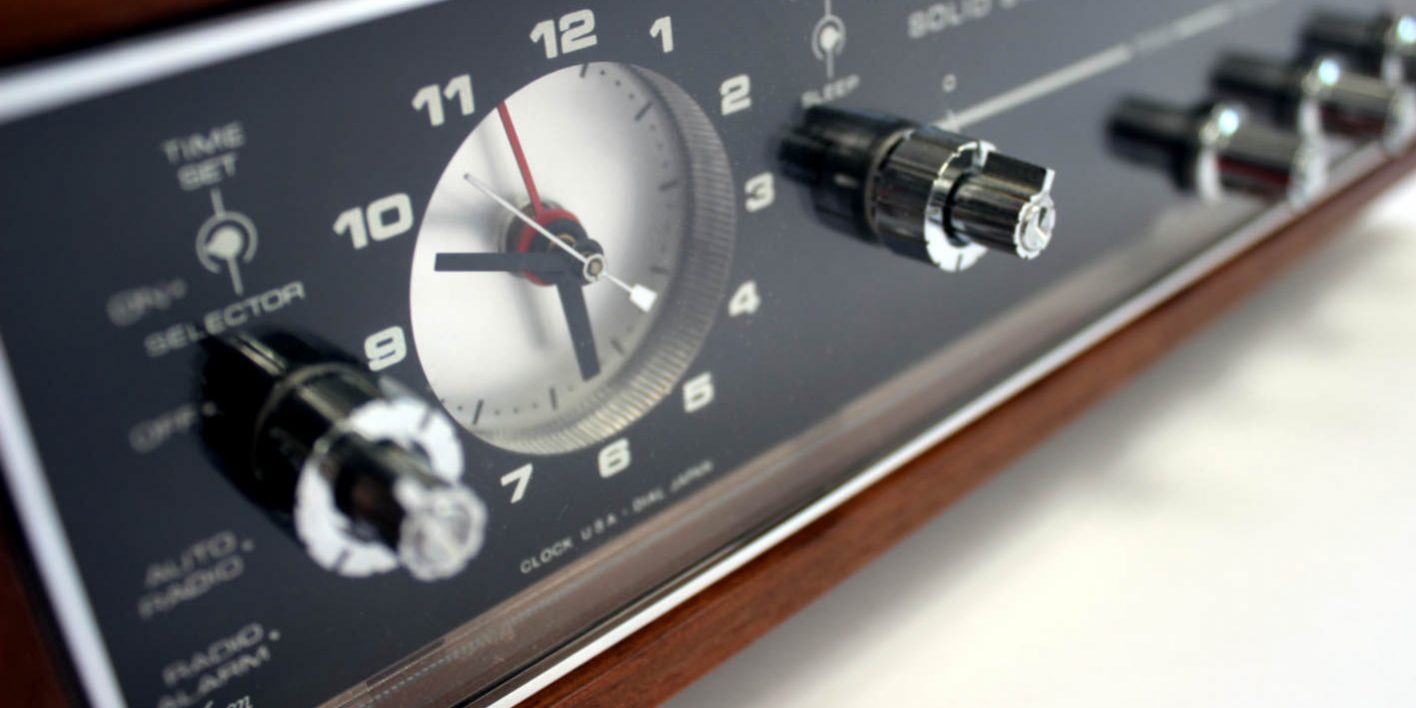 Over half a century old and still alive!

As with most vintage electronics the focus is on the design and its evolution within its industry. Functioning systems and sound quality are not necessarily considered.

Sony produced a huge number of alarm clock radios from the early 60s straight up until present day. The 8RC-54 was one of many Solid-State alarm clock radios. The clock boasted Telechron movement and was available from around 1965. This clock radio followed on from the 8RC-44 which looked identical but had a wood grained face.

Products from this era were often made of real solid woods or real wood veneers as opposed to lookalike vinyl materials. Most were made in Japan and aimed at the US market. They are highly sought after because of this but can be hard to find without chips and scratches. The 8RC-54 however was very popular and is much more commonly found on the second-hand market than any of its immediate predecessors. You can easily find a good working unit for under $50. Mint examples can fetch up to $100.

Following the 8RC-54 was the 8RC-74 which looked very similar but with a slightly more modern faceplate. There is not a lot of literature available on these clock radios but from our research both the 54 and 74 models seem to be amongst Sony’s last models with an analogue clock. Sony went on to have flip clocks and then digital ones in their alarm clock radios

It’s a curious wooden box by modern standards as without the clock it’s usage would not be obvious. The genuine wooden frame with no visible speaker lends its appearance to that of a mini amplifier. It is understated and does not jump out at you in anyway which isn’t bad thing given that it probably lived mainly on bedside tables.

A silver clock face is set back around 1cm from the black face with a clear ribbed plastic reveal that glows red when turned on. It’s a cool effect that brings this relatively plain face to life.

The timber frame is 9mm thick and composed of genuine plywood with real timber veneer and is mitre jointed. It is very well crafted in a way which is rare to find today. The clear acrylic (Plexiglass) front needs to be in good order without yellowing, misting or scratches in order to look in place with the quality frame. Bordering the clear acrylic is a 2mm chromed line the protrudes slightly from the face. There is also a shadow line between this and the timber frame which overall makes for a very smart and neat detail.

The graphics on the metal face-plate are modern, simple and suit the clean form of the timber frame that is devoid of any decoration.

Beautifully detailed corners liken this to a piece of furniture .

Real glass and chromed metal would have put this unit in a significantly higher class but the 8RC-54 was obviously aimed at a more consumer level. Nevertheless, the plastic components are still of a high grade and come across quite few that have been well cared enough to look almost like new. This is quite remarkable for a consumer product that is now almost half a century old. Being of real woods there is potential to fix and restore ones that have only minor blemishes.

It’s a very simple unit to operate and you will marvel initially at how loud and clear the sound is considering its age and that the speaker is on the underside. The real woods and quality components give some weight to the unit which furthers the feeling of quality.

The grooved chromed dial knobs feel substantial and smooth to turn. We love the simplicity of manually turning and tuning into to different radio stations. This is a rather novel thing today, and we even like the cracking sounds in between. Sony made it clear that the clock was of quality and precision by declaring its Telechron movement on the bottom left corner. The second hand moves accordingly around the clock.

There are collectors out there who specialize in clock radios and for them the 8RC-54 would have to be in their collections due to its popularity, and affordability. There are always a few for sale on the second-hand market and with a little patience you will land yourself a near mint specimen. In a time when people are suffering from phone addiction this clock radio with alarm feature could start to find its way back into modern bedrooms. Its retro looks are minimalistic enough to suit most modern bedroom settings.

This is a lovely old thing that makes a case for itself as a cure for those addicted to their phones. Keep this unit next to your bed at night instead of your phone and enjoy its warm wooden sound and soft red lighting. Find a good one, keep the timber veneer well-oiled and it should last another 50 years.

The Sony clock-radio in this review is part of the WOLF collection and was purchased from the USA in 2003. Being a USA model, it is 110-120V and needs a step-down transformer to work in Australia. This makes it a little inconvenient to use but still makes a great display and talking piece. 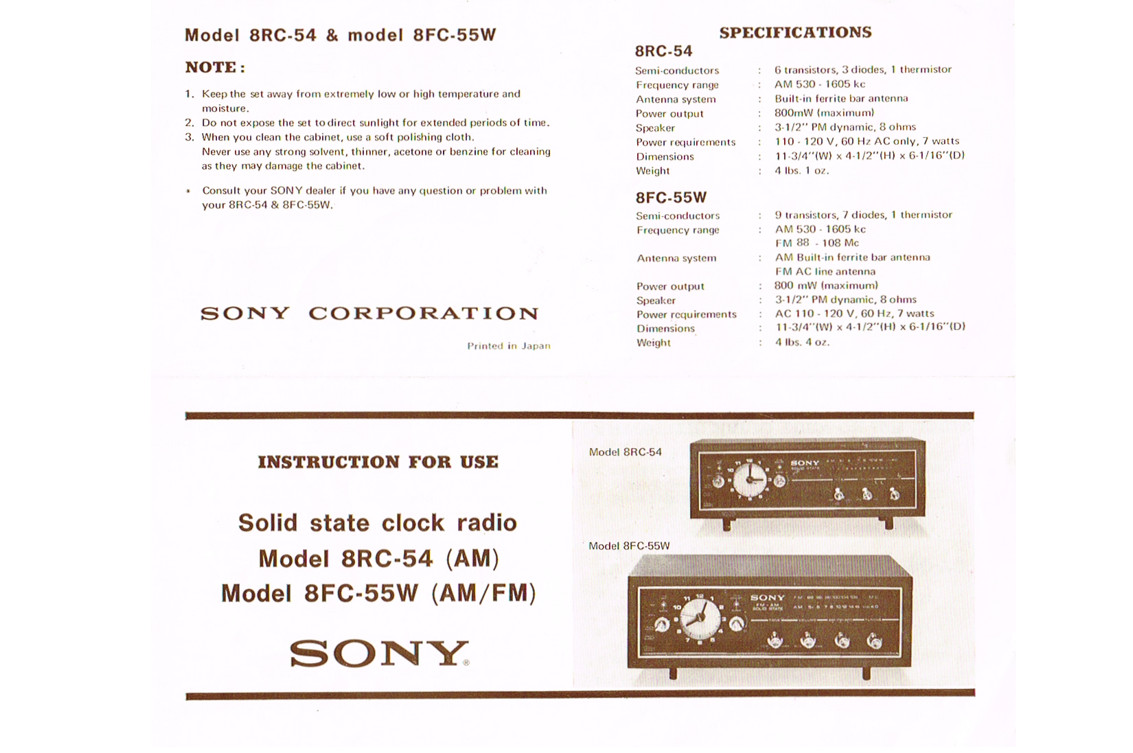 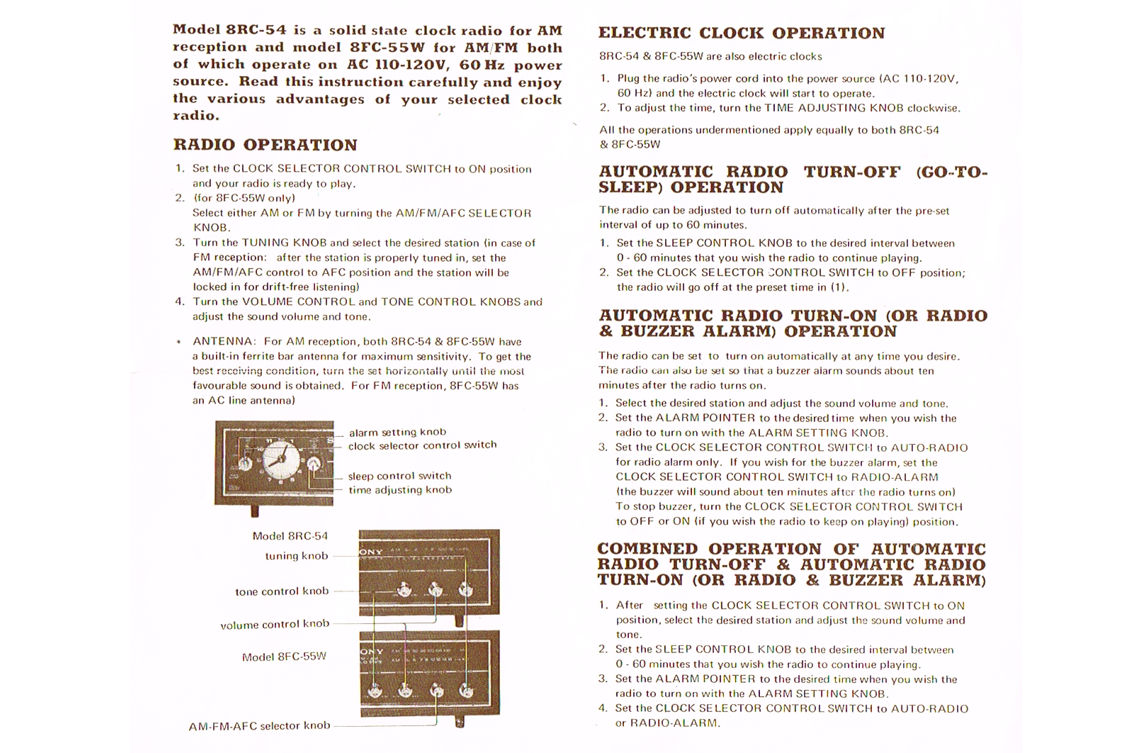 Instructions came in this small leaflet 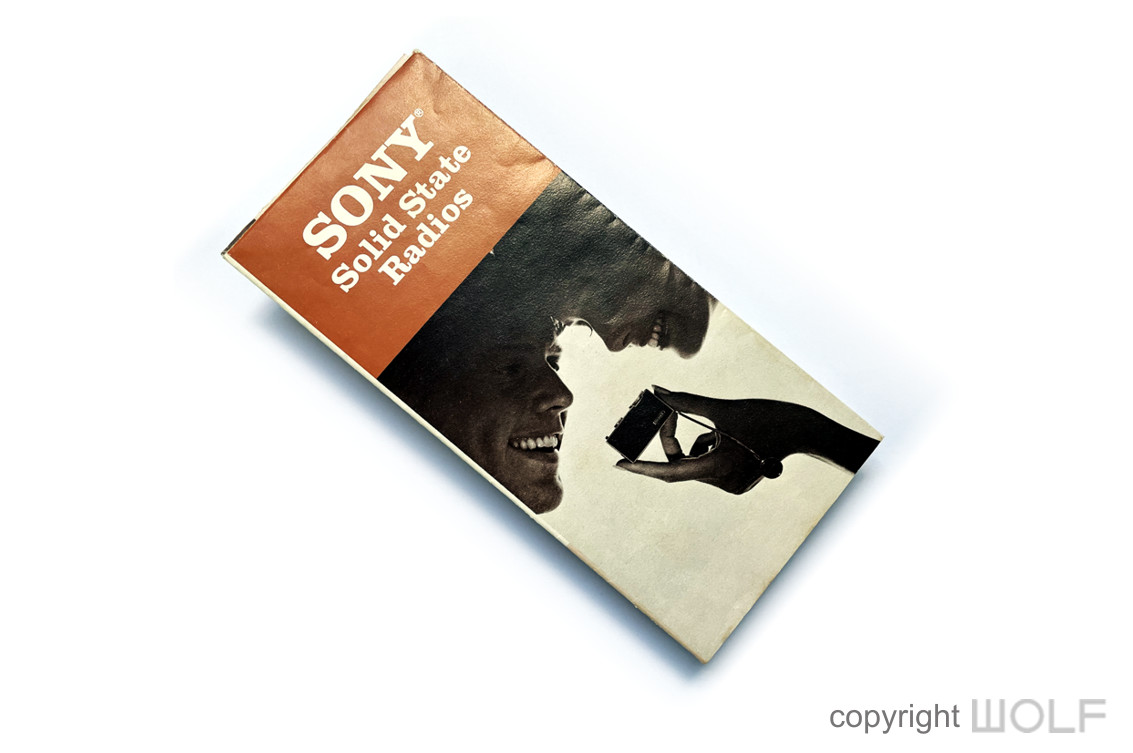 Featured in this small leaflet catalog 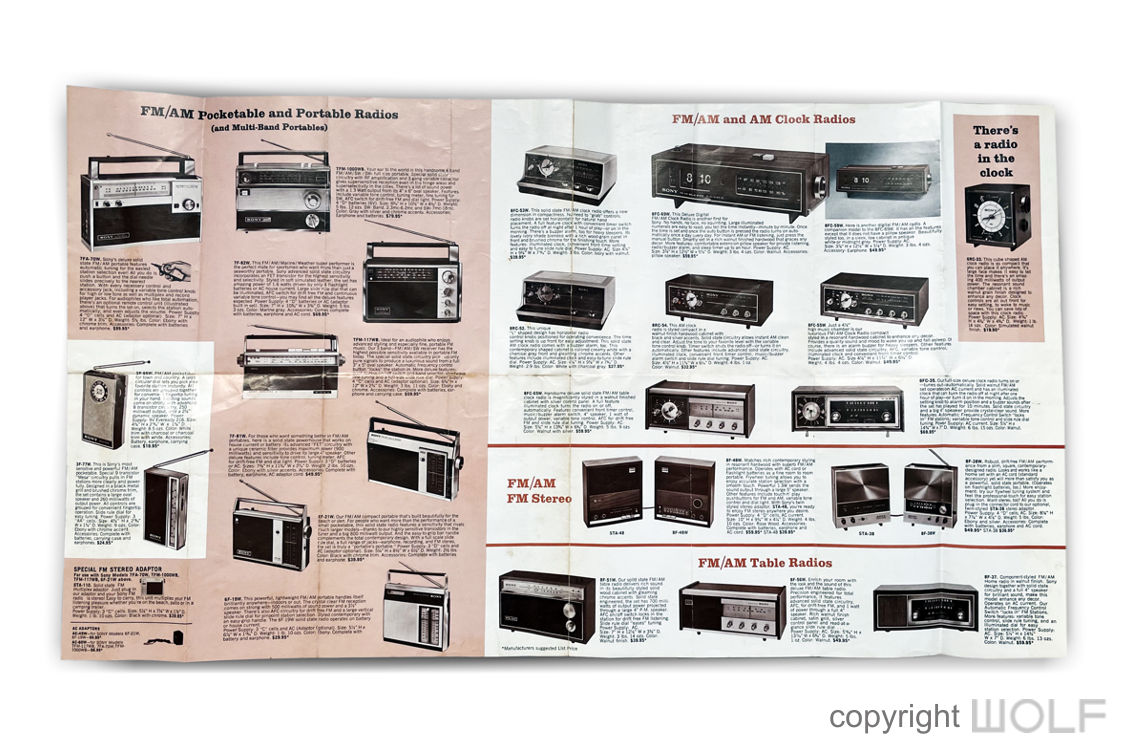