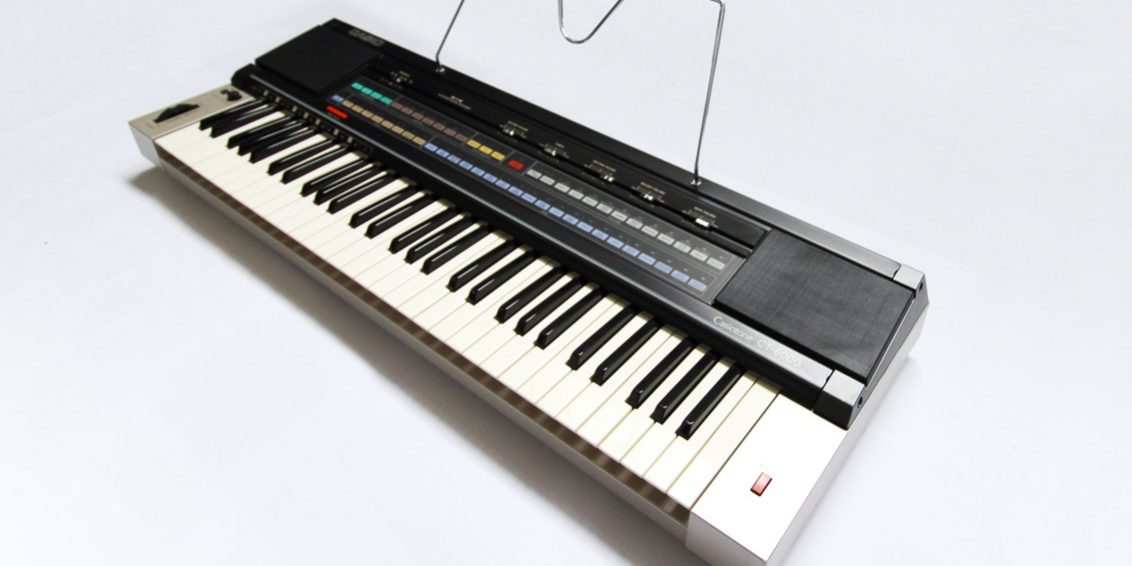 As with most reviews the focus is on the design and its evolution within its industry. The functioning systems and sound quality are not necessarily considered.

Depending on condition they can be between $100 and $300 US. A mint example with original case, music stand and manual could demand as much as $500.

The CT-6000 was intended as a semi-professional instrument. As such it featured MIDI, Velocity/after touch keys and a pitch bend wheel.

There is a certain amount of curiosity with this, as it feels very familiar yet must have been quite futuristic for 1983. That’s because it wants to be more like a synthesizer than an amateur keyboard. It has MIDI, velocity/after-touch keys and even the pitch bend wheel from professional synthesizers and packages it altogether with the Casio Keyboard look plus built in speakers. It even has the same membrane style touch buttons first seen on Yamaha’s DX7. The colours are more playful like those seen on Roland’s Jupiter 8. We’re not saying it’s a copycat, it just wants to be more than a toy.

The CT-6000 weighs 14kg and that’s a significant difference from most amateur keyboards. It has real metal, and this contrasts nicely against the pressure activated membrane switches in brown, green, purple and grey. It has a very DX7 look from the top view that does draw your attention. The sides however are a little lacking in our opinion where the meeting of different materials and shapes do not harmonize. You can even see two rather large screws. While the speakers are reasonably simple and flat, they don’t seem to sit comfortably in position and the lines around them are not perfectly resolved.

We like the colour scheme used on this machine. The metal components are painted in metallic black paint and the rest of the body is in a light beige gold. This two-tone effect is classy, even by todays standards and would have helped to convince customers on its $1000+ price tag when new.

It’s well built, with a step up from previous keyboards through the use of metal panels with metallic paint. There is a strip just above the keys with a smart continuous beige and lavender stripe. The other panel is at the top which wraps down the rear. The Casio logo is printed boldly in the canter of the rear panel, another concept in keeping with professional synthesizers. The beige plastic is vulnerable to scratching and most will have significant ware around those end panels. The membrane buttons are also a way to tell its history with high mileage examples looking rather wavy or even with breaks.

The Keys feel nice and professional. Those membrane switches may look good, but like the DX7 are rather annoying to press. Everything else feels relatively nice to press, and you do want to get stuck into playing this vintage machine. While heavy for amateur machine, its lighter than most synths so it’s still portable enough, especially if you have its original case.

The CT-6000 is a must have for Casio keyboard collectors. It represents a big step forward in 1984, being released just before their professional CZ range. As such it has achieved classic status and mint specimens are likely to increase in value. A complete example will have original manual, music stand, dust cover and hard case. The dust covers are hard to find as they tend to shrink and tear with time. The hard case is rare and particularly nice with beautiful detailing. An original Casio stand of the period will also compliment the CT-6000 nicely.

The CT-6000 has always been attractive for its handsome looks and sturdy build. At the same time, it’s not too classy or serious to have some fun with. They are getting harder to find in good condition and we would suggest they are worth it for the right price. Try to get one with original case as the case is rather nice on its own.

The Keyboard in this review was purchased locally with stand from an original owner who cared for it well. Later on, we acquired another example from Japan that was in relatively poor condition but did come with an original case and music stand which completed the first one.