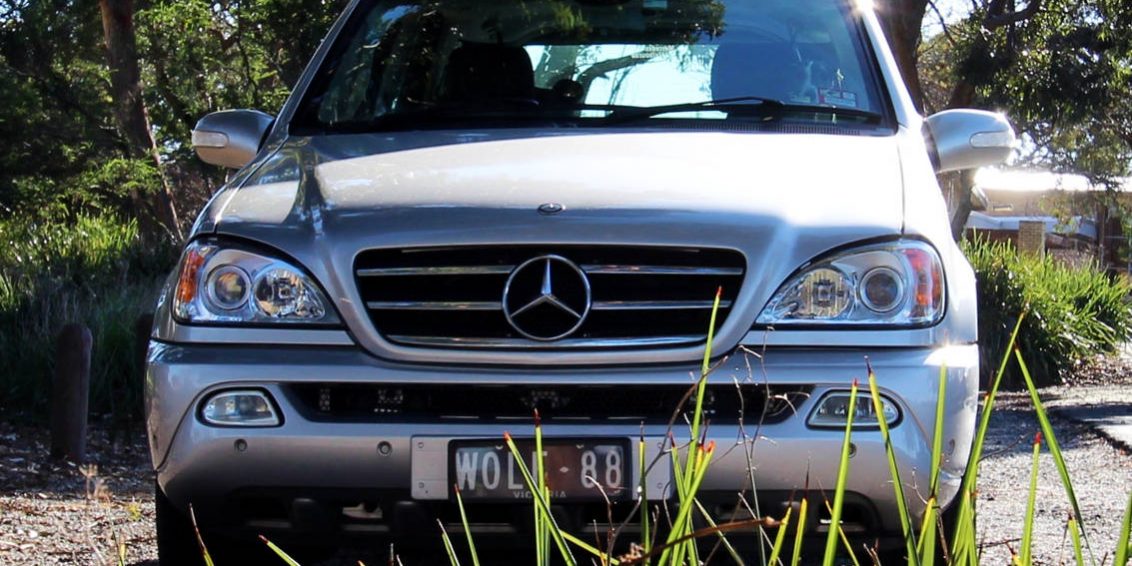 The ML is designated by code as the W163 and was Mercedes first mid-sized SUV launched in 1997.

At the time of this review these cars are probably at the bottom of their depreciation curve and you could purchase a smaller engine ML for just a few thousand dollars. For several thousand dollars you could land yourself one in decent shape, but if you doubled your money again you could get a top of the line ML55 AMG.

In September 1996, before the vehicle was launched, Mercedes-Benz allowed the producers of the film “The Lost World: Jurassic Park” to make use of modified pre-production cars as a way to advertise the W163 ML when it was launched in 1997.

The word that comes to mind is “blobby”, but not necessarily in a negative way. When first released it seemed rather smooth and curvy because the only other Mercedes 4WD up until then was the very boxy G-wagon. This first-generation ML is devoid of any right angles which definitely resulted in a kind of softness to the vehicle. By todays standards however, it is rather bland and undefined so all that softness and bulk feels to us like a blob on wheels.

At the time of launch the ML was considered a large car and that’s why so much effort went into softening the design to have no angles or harsh lines. We think the designers were very successful, and that effort has kept the car looking quite small by todays SUV standards.

Despite being a true off-roader, it does look rather tame. Though soft, most surfaces are relatively flat to seem rather bland and unexciting. It’s more feminine than masculine and more like a family car than an adventurer.

We think this car could have had benefited from a few straighter lines. The way the head lights pinch towards the front grill seems out of character with the Mercedes look but we can appreciate they were trying something new.

Internally the car continues with a curved response that relates to the exterior. It is restrained by modern standards with a rather gentle and conservative layout. There is nothing particularly unique or fancy worth mentioning. Wood veneer finishes on the center console and around the door handles help to give a slight feeling of luxury but that’s about it. Overall, there is a lack of detail that makes this feel like a Japanese car than German Mercedes.

The ML existed during the Daimler- Chrysler merger and most cars from that era suffered from being made in USA. While the ML was a break from the squarer shaped mold, it was not well regarded for quality. There is an awful lot of plastic and vinyl and even the wooden trims seem a bit too thin for us. For a substantial car it feels a little underdone, particularly with the interiors. While most seats were genuine leather, they are not plush or luxurious and seem more like vinyl.

While small by todays SUV standards this car packs a lot inside. It’s a seven-seater car and the last two seats are removable. With those seats out and the others folded down you have one big space.

This ML is shorter than most other Mercedes models which actually makes it convenient and easy to park. It’s not a car to make you feel sporty or adventurous but it’s a safe solid workhorse that makes for an ideal family car.

This car will always have the honour of being the very first in Mercedes M-class and not to mention its appearance on the silver screen. However, it is rather dated, heavy and petrol hungry. It’s not built like previous generations that could go on for miles and miles. A high KM car will start to have problems and when repairs cost more than the value of the car you have to consider its worth carefully.

A good low KM example is still an excellent safe workhorse and could be worth hanging on to. Being the first ML, it will eventually start to appreciate to be a classic. If you have the space to keep one, we think the time to find a last off the run AMG model is nearing. Its a lot of car for very little investment.

Mercedes cars from the Daimler- Chrysler era will struggle to find their way into classic car status due to their quality. These are likely to be the forgotten cars that end up as scrap metal. The ML may however escape this being a more robust 4WD and being the very first SUV after the G-wagon. We would certainly consider them a worthy modern classic and now is the time to start hunting for a mint low km ML55 AMG.

The ML in this review is a 2003 ML350 and was a solid workhorse for 15 years. With WOLF Architects logo and information on its sides it was well known as the WOLF mobile and did its part in advertising one of Melbourne highly acclaimed architectural practices.