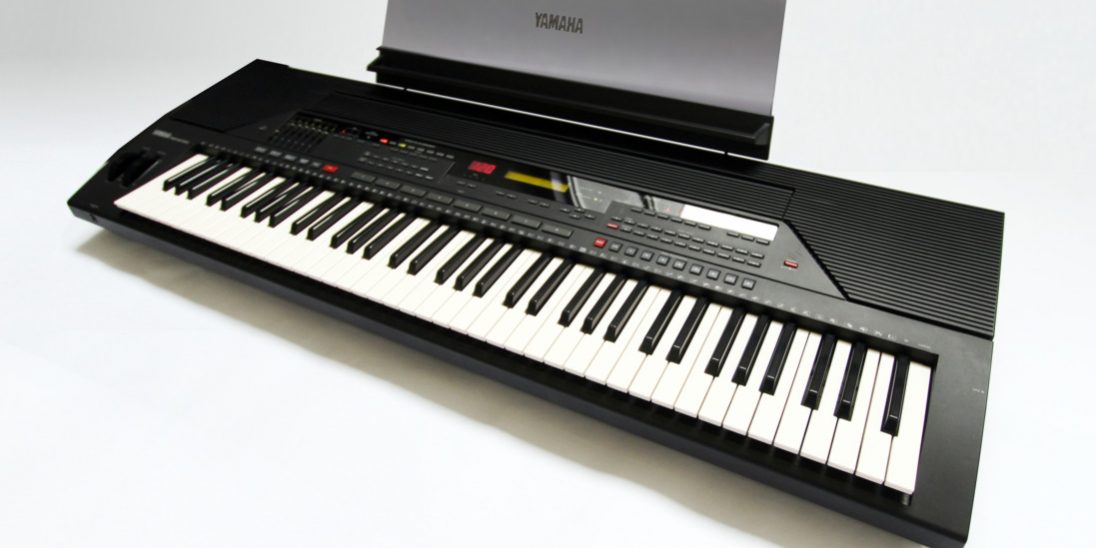 In 1991 the PSR-6700 was Yamaha’s top of line in their home keyboard range. It had a 76-key Velocity sensitive keyboard with 40-note polyphony. With an onboard sequencer, built in effects and a disk drive it was a convincing alternative to a professional synthesizer.

In the UK they sold for 2000 pounds when new, which was as much as many professional synths at that time. They were popular and you can find them second hand starting from only $200 (Aust) for your average unit. A mint example can be over $500 and we would question if that is still value for money? Its technology, sound, and build quality would have been impressive for 1991 but almost 30 years on you will make better music elsewhere for $500. It may however be worth considering for collectible purposes.

The PSR-6700 was marketed as “Prosumer Keyboard” because it was intended to feel like a professional synthesizer even though it was intended for home use. In our research we also found the PSR-5700 which looks like a shorter smaller brother that is less professional looking.

It’s a big machine and does appear different in the flesh from where ever we’ve seen it online or in print. Quality comes to mind immediately as this machine is very well built. It’s more understated than previous home keyboards as Yamaha had done away with the bright bold colours of the 1980s. The smallish buttons and built in speakers give it away as a home keyboard but it has a seriousness about it that expresses quite clearly- “I am not a toy!”

Dominating the design are the corrugated horizontal bands across the top half of the face (approx. 30 lines in total). It bears resemblance to Roland’s E series keyboards in 1988. We believe it was a clever way to hide the speakers and make the machine feel more professional. Separating the grooves from the rest of the face is a thick groove that runs across the front and then angles down on each end towards the front. There is also a concealed panel that lifts up to reveal a whole other set of buttons. The underside of this lift up panel has all the patch names. This is a departure from previous designs that had the sound names printed visibly on the outside. It was another design feature that seems intended to disguise its homeliness. The buttons are all arranged in a neat and systematic fashion but overall, they are rather small.

The profile is quite thick as a result of the built-in speakers so Yamaha tried to counter this by recessing the base section by approx. one inch. This helps to make the keyboard look lighter as though hovering above the surface. The sides however are rather flat as if cut straight from an extruded block, and this does not help to hide the unit’s thickness. The disk drive does however, does neatly tuck itself in the recessed base on the right side.

A groove line separating front and back is the main geometric feature line.

The angled groove separating the speakers from the control panel looks like a water drain.

Yamaha have always demanded quality in their products and the PSR-6700 seemed to reach a new level for home keyboards. It wants to be professional so quality materials and finishes were used. The most notable thing on this is its weight. At 21kg this instrument was heavier than Yamahas flagship SY99 synthesizer. This was mainly due to a heavy steel base rather than the usual home-keyboard style plastics. The flat finished black plastic casing on the front/top and sides are of high grade and feel similar to those on the professional synthesizer range.

Quality is also seen in the music stand which is reminiscent of that on the DX7II Centennial. It is large, substantial and well detailed with a thick shelf for music books. There is also a stylish smoked acrylic back plate with Yamaha printed in the center. The flip up panel is made of steel and is very neat with a smooth and weighted feel that exudes even more quality. Yamaha also did away with the usual rubberized buttons in favour of more solid hard plastic ones.

The only component on this machine that feels a little flimsy is the clear plastic sheet over the display area that is basically the same as those found on other home keyboards. It feels loose, scratches easily and should have been made of a more solid material as seen on the professional synths.

Unlike many in the home keyboard range, the PSR-6700 also has a back-lit display screen rather than just a numerical digit display for sound number. It’s still too small in our opinion but does make a difference and looks more professional.

Some of the buttons feel too small, and the power button in particular seems uneventful and too small on its own at the far right of the front panel.

We can’t be sure on this, but the keys on the unit in this preview feel really nice and of a higher grade.

Home keyboards in general are not as collectible as professional synthesizers, though there are people out there who focus on collecting home keyboards. Whenever we consider home keyboards from a collectible perspective it’s usually because it celebrates a milestone of some kind. The PSR-6700 does not represent any particular breakthrough in design or technology but it does mark a benchmark in quality for Yamaha’s home keyboards. Its sheer weight and solidness will impress and there is enough design detailing for it to be respected as a serious machine. From our research the 6700 also seems to be the last of the conventional styles home keyboards. The next milestone was the PSR-7000 which looks quite different and rather bulky like a digital piano. Following that we enter an era of Tyros keyboards, but in terms of a more traditional/conventional keyboard the 6700 was end of the line, biggest and best. From that perspective its worth considering as a future classic.

People expect high prices at resale because the PSR-6700 cost so much when new, but it’s not worth it in our opinion. However, if you can find a mint one for under $300, we think it still has enough in it to have some fun with.

It’s an interesting machine because it’s really too well built for an amateur instrument. It’s not a toy but it’s also not professional (though it could pass for being professional). We started this review rather skeptical but over the course of our studies discovered that there was a lot of thought in its design. It can’t escape being a home keyboard but details such as the speaker treatment, concealed panel, Back-lit screen and even Pitch benders (Identical to those on the SY synths), all help to make this feel like serious instrument worthy of the “Prosumer Keyboard” label.

Snap one up you if you find a cheap one in mint condition, but you’ll need space as its large and very heavy. Make sure it has its nice music stand even though it does look sleeker and more professional without it.

It’s actually quite sleek without the music stand, and the uninitiated might not assume it had built in speakers.

The PSR-6700 came with these two manuals.

The keyboard in this review was purchased from NSW and is in near Mint condition. It was purchase as a machine built with quality in mind with potential as a future classic.