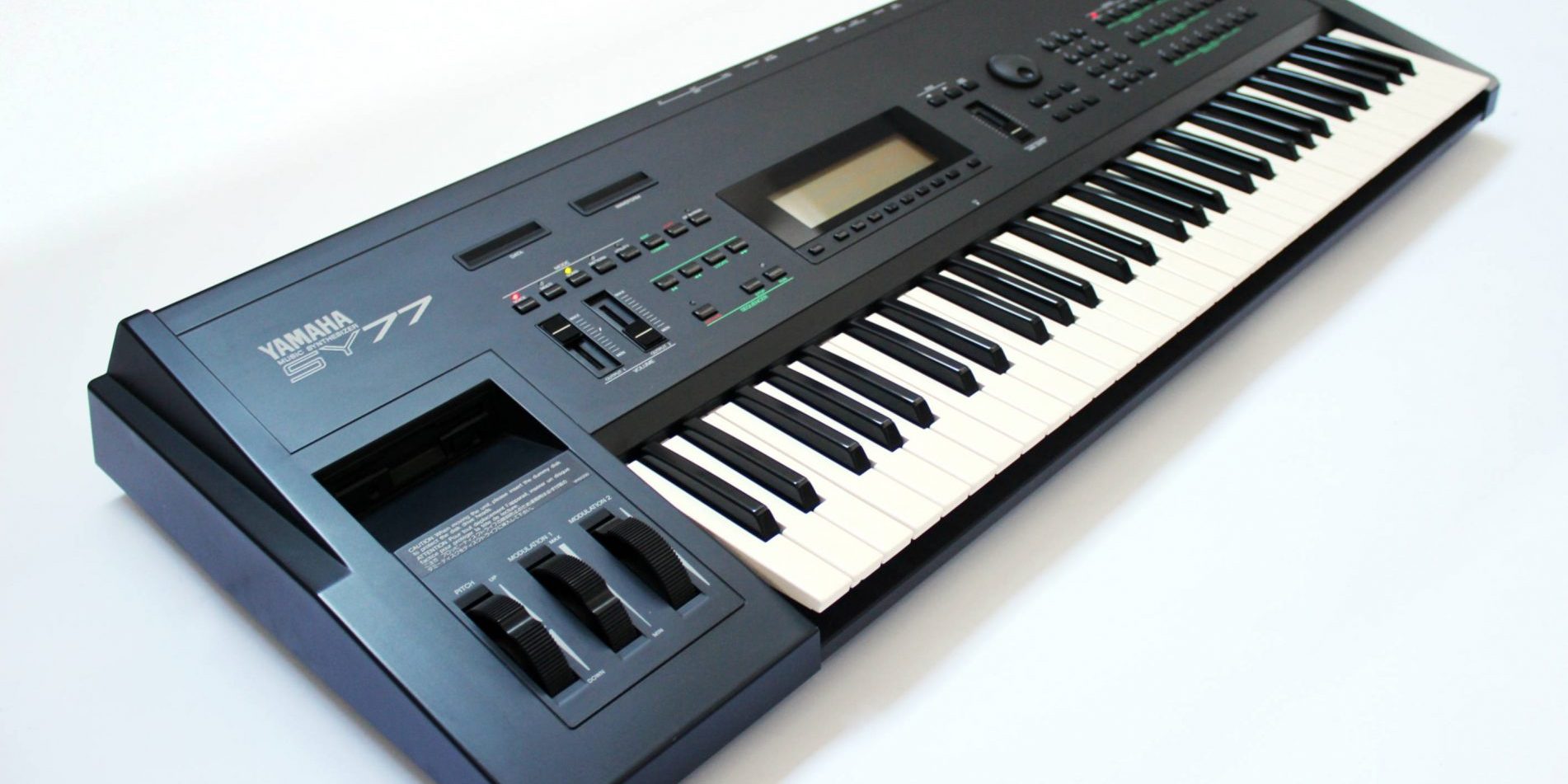 Yamaha followed up its highly successful but aging DX line with the SY series. Launched in 1989, the SY77 was the new flagship synthesizer. Yamaha called it a “music synthesizer” because it had a built-in sequencer and effects processor. While this was not Yamaha’s first workstation (as the earlier YS-200 and V50 synths both had had onboard sequencers), it was the first workstation that felt professional. An all in one music production machine was much needed in a time of serious competition from rival brands Roland and Korg.

The SY77 was popular and sold in strong numbers, so they appear regularly on the second-hand market. They were not as solidly built as their DX predecessors and can look a little worn. Good examples that have been stored in their original hard cases do pop up from  time to time and are reasonably priced.

The SY77 came as bit of a surprise since Yamaha had eluded to a V-80FD model as successor to the DX7 Mk II. Prior to launching the SY77 Yamaha released the RX8 drum machine which had similar styling to the V-80FD prototype. They also launched the V-50 as a junior workstation synth so, the V-80FD seemed all set to go. Then all of a sudden we had the SY77 instead, which begs the question- “What ever happened to the V-80FD”?

It looks big but minimalistic and in keeping with the freshness of the early 90s. Yamaha tried to create an elegant looking machine with clean lines, and we feel they were relatively successful. The groove lines and heavily textured surfaces of the DX7 MK II were replaced with large expanses of plain dark grey metal. While smooth, there is still a fine texture to the charcoal paint finish which gives a slightly flat look.

The buttons are smaller than usual and this creates more open spaces over the main front surface. In its day it looked quite cool and powerful.

The new disk drive location is probably the only thing that upsets the  symmetry of the layout. The paints texture is just enough to keep this synth from looking too bulky but the expansive smooth surfaces probably might have benefited from  further lines or angles. It’s a big machine and Yamaha tried to make it look slenderer by giving the end panels some design attention with stepped layering. The designers also tried to make it look softer by removing as many sharp or right angles as possible. There are plenty of curved corners that add to the smooth look and feel.

In general, the SY77 is well assembled with no visible screws.

Like the DX7 MKII, the SY77 retained similar bumper protection moldings at the rear of the end panels.

The disk drive located on the front is more practical than its predecessor and even allows you to store a few disks in front of it. It’s a clever detail even though it breaks up the cleanliness of the front panels layout. A third control wheel was introduced and each wheel is now wider which we feel was a significant improvement. These new wheel designs first seen in the YS-100 & YS-200 in 1988.

The best view of this machine is from the front because the whole face is on a slope which is makes it feel slender and is also practical for screen visibility.

Our main criticism is with the new buttons which are slightly too small and don’t feel nice to push. As they age, they also tend to get stuck and need servicing. The SY77 also introduced Yamaha’s first alpha dial controller and perhaps that was why they paid less attention to the buttons.

The best angle, and hence it was used for the cover of their brochure.

Introduction of the alpha dial helped to make up for its sticky buttons.

These have yet to be highly sought after or collectible. Nevertheless, the SY77 still represents a significant milestone in the company’s history and deserves respect. The additional wheel, larger screen, alpha dial and on-board sequencer with effect processors made it competitive against rival brands.

Although there was a large sound library available, the SY77 did not have a huge range of optional accessories. Yamaha even dropped the music stand which would normally have attached itself to the rear. There was only one factory hard case that we know of, and no soft cases were ever available (possible because the synth was too large). The textured panels and black tinted trimmings found on DX Mk II hard cases gave way to a smoother material.

The original hard case- always worth having. This is the LC-SY1H

According to Japanese product literature there was also an LC-SY1F (Left). It appears here to have a different colour or texture. At first we believed this to be a misprint but we’ve seen this colour difference across more than one catalog. At 3 times the price of the standard black case we are starting to suspect that it might indeed be a more special case. IN gold perhaps? If anyone has one, we’d love to see a photo to confirm it;s reality and identity.

A 1992 Japanese Catalog shows the LC-SY1F in still a different colour, though not gold.

This flight case came with an SY77 Purchased from Japan. We believe that it could be the elusive  LC-SY1F. It is the exact same size as the hard case, with the same edges, corners and handle. It also uses the same surface material found on the DX7II series hard case, except in a dark blue. The only doubt we have comes from the fact that this case does not say YAMAHA on one side. It’s possible that it wore away as many DX7II hard cases lost their logos due to a poor adhesion between the label and the rubberized surface. Or perhaps Yamaha simply did not put their logos on this flight case. If we ever find another SY77 flight case, we may be able to confirm.

The manual had a more durable semi-plastic cover which was more durable and came in 3 volumes, (each in a different language).

Further literature in addition to the manuals

There were two demonstration disks for the SY77. That on the left is a very rare demo CD featuring 5 songs composed fully on the SY77. This we understand was exclusive to dealers to demo to customers and not meant for public resale. The floppy disk on the right was a standard demo disk that came standard with every SY77

The SY77 still had card slots which was rather strange given that it also had a disk drive because disks were more versatile and affordable. There were two RAM storage cards, the 64K and the 32K, which both came with protective clear plastic hard cases.

A good range of sounds were released through Yamaha in their new thin RAM cartridges that were nicely packaged inside CD cases.

The sound cards are beautiful objects in themselves that are well crafted with a good weight to them.

We like the SY77 for what it tried to achieve and for what it represents but it could not live up to the significance of the DX7 and maybe nothing ever will. It was then overshadowed by its younger but bigger brother the SY99 that was significantly better. Out of the entire SY range the SY77 and SY99 are the only one’s worth collecting in our opinion. They are both still very usable from sound and functional perspectives. We don’t recommend looking at any of the smaller SY models which seem very limited and even more plasticky.

The SY77 had a beautiful brochure that was significantly better than its predecessors.

In the days before Photoshop this photo remains one of Yamaha’s finest synthesizer photos.

In Japan the SY77 had another brochure that explained its RCM system in greater detail. This brochure shown above is very rare.

A neat center fold out.

Japanese YAMAHA 1990 product catalog presented the SY77 on the front cover and with a two page spread within.

Japanese YAMAHA 1990 product catalog had this interesting Graphic photograph of the S&& with its smaller cousins.

Size comparison between the SY77 and the SY99 that followed it.

Size comparison between the cases of the SY77 and the SY99 that followed it.

A very rare Golden Sticker sheet, which was a promotional item for the SY77. This specimen came from Yamaha in Singapore and may be the only one left on the planet.

This unique personal planner was an exclusive in the USA. We don’t know if this was available to consumers or to Yamaha staff but it was definitely specific to the SY77.

The brass plaque was a classy touch and will long outlive the black vinyl that has deteriorated significantly over the decades.

The cover page is of quality black paper with golden print- very similar to that used in Yamaha’s limited edition DX7 centennial manual (1987).

With more technical SY77 content within, we think this planner may have been intended for Yamaha sales staff.

Yamaha’s new Breath controller the BC2 coincided with the SY era.

Left-In January 1990, issue 3 of Sound and Sound Magazine featured the SY77. Right-Japanese Keyboard Magazine made an exclusive user guide book for the SY77

The mysterious V-80FD that never happened. Anyone know where we can find this original prototype and maybe buy it?

The synthesizer in this review is from the Wolf private collection. It was purchased new from Tom Lee music in Hong Kong in early 1990. Many original songs were composed and performed by Taras Wolf with this Synthesizer. Together with original hard case it remains in excellent condition though it does have some slight signs or surface ware.