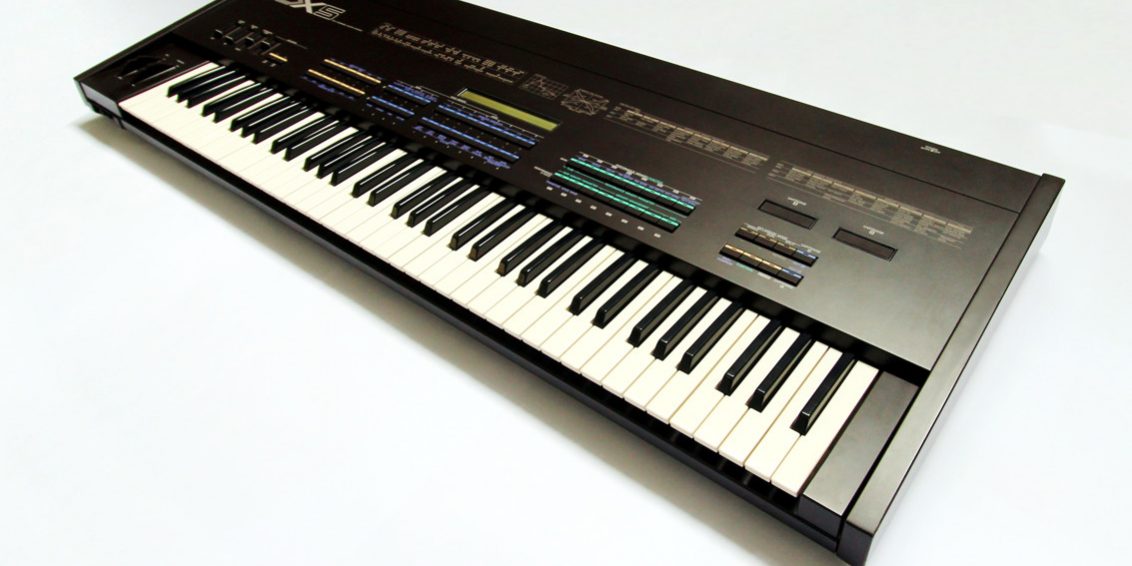 The Yamaha DX5 was introduced in 1985 and could be seen as either a more affordable DX1 (minus the wooden piano style keys,) or a more advanced DX7. Internally it had the power of two DX7’s and externally it was longer with an additional octave.

Though more affordable than the DX1 they were still expensive at $3500 US when new. Sold in relatively few numbers they remain rare today. Unlike the DX1 however you do tend to find one on the market most of the time but are not always in great shape. They can start at $1500 for even a beat up one and extend well over $3000 for a pristine example with accessories. The original factory case is very rare and usually only found with Japanese examples. From our research the DX5 was only available as a 100V machine. If anyone has a factory 240V unit please let us know.

By 1985 the World had enjoyed the DX7 for two years and pop music was in full swing with FM influenced music. Musicians wondered about the next big thing and Yamaha were in development of the DX7 mark II. The DX5 was in some ways a prototype for the Mark II which primarily was about putting two DX7’s into one body. Excluding the GS1 & GS2 the DX5 was Yamahas first ever synthesizer with 76 keys.

When we reviewed the DX7 three years ago, our first impression was that the brown looked dated, dull and not in keeping with the digital age of the 1980s. While the DX5 retained the same colour it looks smarter and more sophisticated than the DX7 due to its larger dimensions, with buttons and screen carried over from the DX1. The additional octave in particular makes for more elegant proportions.

The DX5 uses the same buttons as those on the DX1 rather than the novel flat membrane with buttons found on the DX7. Together with the larger screen this instrument feels somehow more professional than the DX7. The graphics are of a high-quality print and the use of aqua and violet offsets nicely against all that brown.

The end panels are simpler in design to those on the DX7 but we believe the flat end panel on the left with the two wheels, as well as the other on the right are the same parts brought over from the DX7. Yamaha did away visible screws on the front panel, and with just one grove line in the large flat metal control panel the DX5 is relatively sleek for such a large instrument.

Although 18kg in weight, it feels quite light considering its size seems almost double that of the DX7. The body is robust and composed mostly of quality steel. The surface is less smooth than the DX7 and has a very slight graininess that Yamaha would take further on the Mark II.

The end panels are thick painted wood rather than plastic. It’s a quality finish but does not survive well, especially with studio or stage performance. It’s very hard to find a DX5 with nice original end panels as the paint tends to chip with the slightest knock. Many have been replaced with aftermarket wooden ones that try to make it feel more like a DX1.

There are four slider controls that have the same design as other DX models and they all feel smooth to use. The buttons brought back from the DX1 were proof that those membrane type buttons on the DX7 were not cutting it.

The screen was considered large in its day and made editing easier. This became the standard size in many synthesizers at that time. The additional octave was a welcomed idea though (excluding the limited centennial DX7) Yamaha would not release another 76-key synth until 1991 with the SY99. The volume control for the headphones was another feature brought back from the DX1 and not seen again on future models.

The DX5 is never going to be as iconic or legendary as either the DX7 or the DX1. It’s an in-between model that your average musician may never have even heard of. For a synthesizer collector (and they do exist) the DX5 is a rare and beautiful beast that makes a good compromise for those unable to attain the mighty DX1.

Being relatively rare and like a smaller DX1 they will always be more valuable than the DX7. If you are patient, able to hunt vigilantly, you will land yourself a mint DX5 that will continue to appreciate.

The original accessories are also becoming sought after, and anything your DX5 comes with is often a bonus as most sellers don’t mark up their prices significantly for included accessories.

The original black hardcase is very rare and most likely only available in Japan.

The DX5 is more appealing from a design perspective than the DX7, and perhaps even better than the DX1 in proportions. With the Mark II just around the corner the DX5 did kind of fall through a crack in time. It is still a rare vintage synth and if you have the space it’s worth having as your DX1 alternative.

The DX5 case was the last to have a heavily textured fiberglass body.

According to Japanese sales literature the DX5 case (LC-5H), was sold for 43,000 Yen. Until 1986 it was illustrated in the same blue colour as the original DX7 Hard case. This appears to be unique to the prototype case, as all DX5 cases in our research have been black.

By 1986 the LC-5H case was correctly illustrated in black colour. In the Japanese Brochure the DX5 is sold alongside the Dx7, DX9 and DX1.

There was also a music stand that connects to the synth via two holes on the rear panel. These were rarely used and are often missing.

The original ROM sound cartridges came in these Foam casings, which are very rare to find today.

While the DX5 was compatible with both the DX1 and DX7 ROM cound cartridges, they came with their own set with the ROMs labelled DX1/DX5.

Japanese sales literature such as this one evidence that the DX5 was sold as late as 1988. Is that a glass of whisky in the corner?