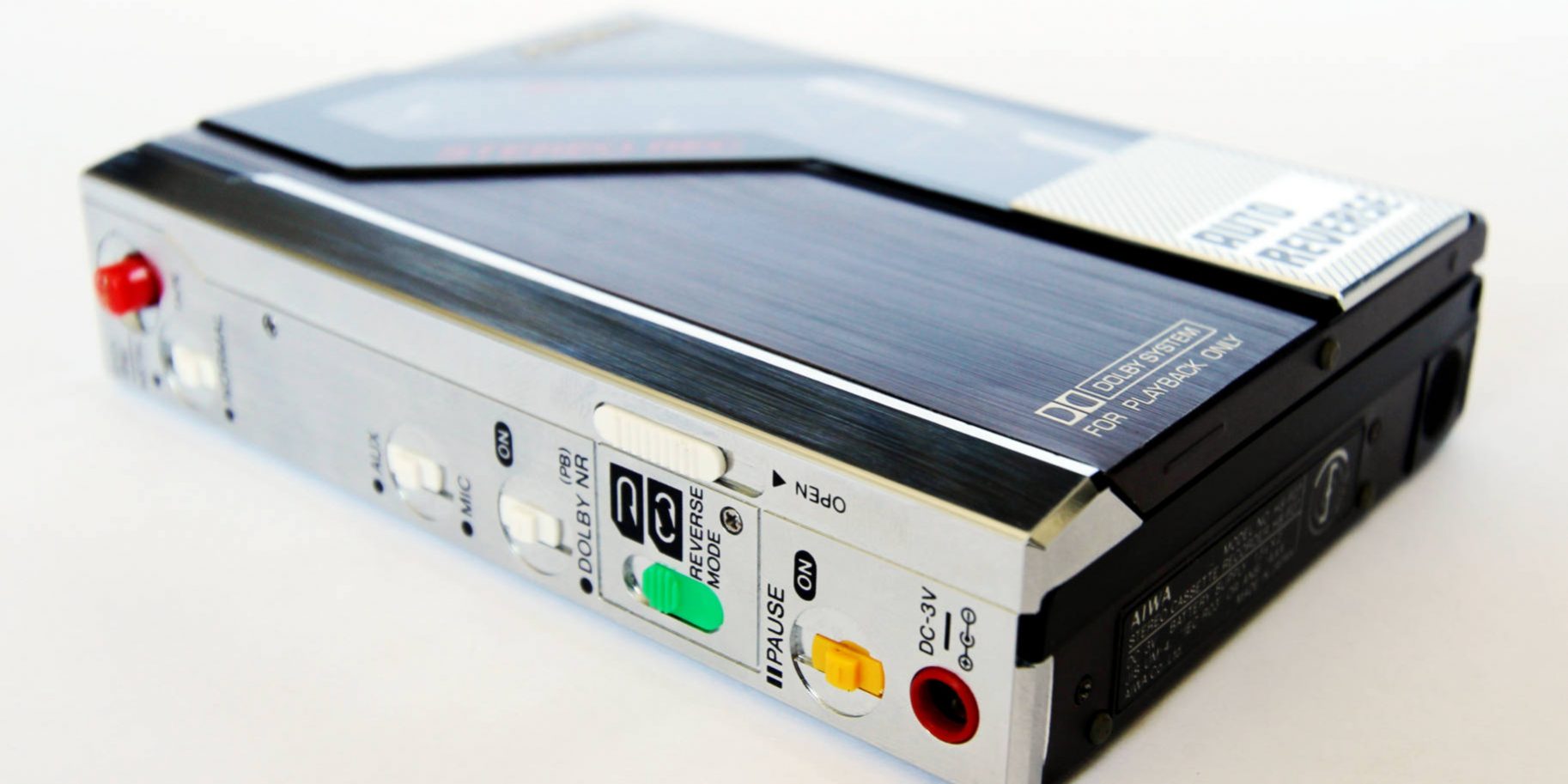 Aiwa’s HS-F07 was a part of a series consisting of the HS-P7, HS P07, & HS-PO2MkII. They were designed to compete fiercely against SONY who created the Walkman concept and had dominated much of the market. While essentially a Walkman, Aiwa preferred theirs to be considered as compact cassette player or recorders. Released in 1984, it was advertised as being the World’s smallest stereo cassette recorder with auto reverse.

These do show up regularly as they were produced in large numbers but they are often in damaged/no-working condition. Despite this they still command between $200 to $500. A really clean one that looks good but not 100% working can fetch up to $500, and perfect mint examples could be over $1000. They are highly prized by Walkman collectors of which some even try own this Walkman in all their different colours.

The HS-F07 was the top of the line and made famous from its use in the feature film “Back to the Future (1985)”. They were available in Red, Blue, silver, grey and gold. Gold seems to be the most highly sought after with good ones easily fetching several hundred dollars. The Silver one however is probably the most collectible being the same as the one in the movie.

At first it looks rather busy with different angles and colourful switches/buttons. But then we remember that this was released in 1984 and cool it must have been at the time. In fact, it must have been quite futuristic in its day and hence was used in the film back to the future.

The Walkman’s in this series all feels comfortable to hold thanks to their compact size and bevelled edges. The body is mostly constructed of metal with a significant chrome plate down the left side. There is a substantial mix of different metal finishes between chrome plated, painted and anodised brush aluminium. Further to this is a large clear acrylic window that finishes towards the bottom side with a matt silver plate advertising the words “Auto reverse”. All these different materials are creatively connected with angles and bevels. The designers seemed to prefer complex geometry and intersections as opposed to being more flush and streamline. The acrylic window for example sits proud of the body with polished bevel edges.

In our opinion there are probably too many different materials, angles and colour tones but considering this is from 1984, we concede that it was a positive bold and aggressive design effort. It would have been super cool in its day and a good departure from its competitors.

The HS Walkman’s series in this review are all quite distinguishable by the large clear acrylic window which bends in a sharp angular way towards the top left corner. The silver plate printed with “Auto Reverse” looks a bit like an afterthought and we think the design would be more streamline without it. However, we understand that Auto Reverse was a very big deal at that time and AIWA was clearly doing all they could to promote this feature. Plastering it on the face like a proud badge was obviously a marketing solution.

This Walkman is exciting to look at, but in our opinion the buttons are too conventional against all its complex geometry. We also question the choice of plastics and colours that don’t seem to compliment any of the HS colour range.

The HS-F07 is well assembled and built with quality in mind but it does not feel as solid or sturdy as its SONY rivals. When compared against similar vintage products these AIWA units today seem to have a lot more ware and signs of aging.

The buttons tend to feel loose and the small plastic ones are just……too plastic. The little rubber bumpers on the underside are a nice touch and influences you to stand this Walkman tall on its bottom side, rather than laying it flat on a table and exposing the surfaces to scratching.

The HS-F07 packed a lot of functions into a small package and offered good value for money. The recording function was handy and we think the small microphone attachment was very clever for its time.

The clear window is reasonably tough and serves a good purpose while also being attractive. The button and graphics make it feel quite busy but busy looking was often cool in the 80s.

Of all AIWA products this is one of their most iconic pieces. Good ones always seem to sell well and we can understand their desirability. However, we don’t understand why even beat up ones’ command high prices. The silver one is the one that seems most solid as an investment but we think some of the other colours in the range are probably more scarce and retro looking.

Our suggestion is to go for any colour so long as it is in good cosmetic condition and at least powers up. You will have yourself a cool piece of 80s design that won’t break the bank. In most cases a simple service with a new belt will bring them back to being fully functional. It would be nice to get more accessories like microphone, head phones and protective case but you’ll have to extend your budget significantly. Good ones with all the bells and whistles never go for a bargain.

This series really pushed SONY hard and helped to put AIWA on the map as a serious player during the mid-1980s. If you’re a patient hunter or someone with deep pockets this celebrity Walkman is a good investment. It exemplifies 80s design styling and will only look more classic with time.

Taras WOLF owned a yellow HS-P7 as his very first Walkman in 1984. It’s long gone now but if anyone know of another one out there we would be keen to make an offer.