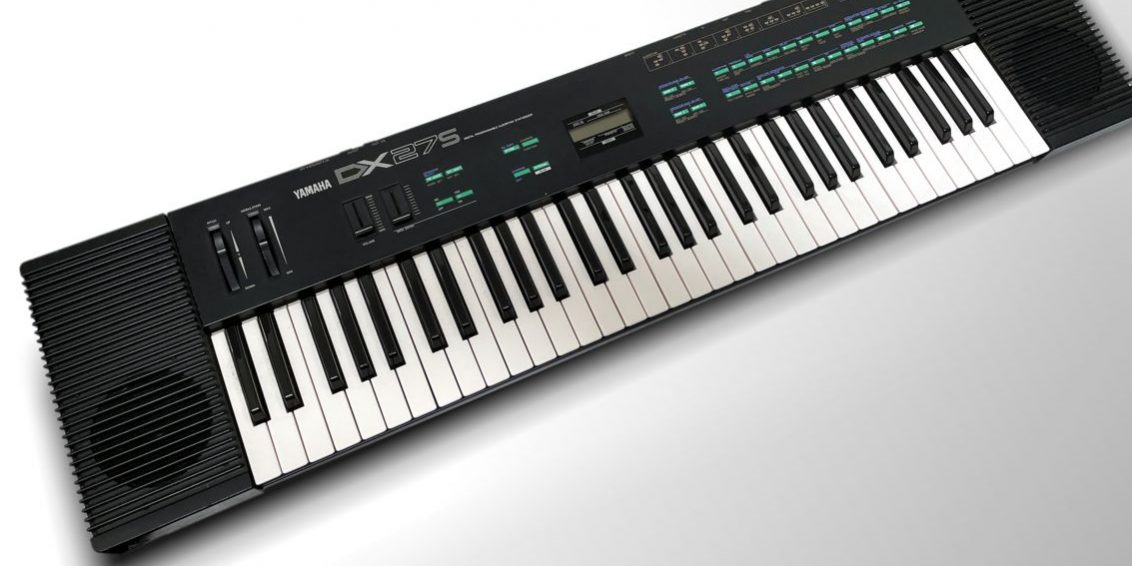 Is it still a synthesizer if it has built in speakers?

The Yamaha DX27S was introduced in 1986 and is identical to the DX27 but in black colour with built in speakers. It has been described as a DX100 with 61 full sized keys. It was designed as a consumer level DX synthesizer for those that could not afford a DX7.

The DX27S is quite elusive and we believe sold in relatively small numbers. Most will be in Japan though occasionally you find them for sale from the USA. The in-built speakers are unique and help the DX27S to command higher prices than their brown DX27 brothers. Mint examples with original accessories should fetch over $500, but that all depends on buyer interest.

While relatively unknown this synthesizer this synthesizer can at least lay claim a few firsts for Yamaha. It was their first full sized key synthesizer to have built in speakers and be in black colour. In Japan the DX27S was also labelled as the SDX27S and used in schools. The SDX models are even harder to find.

When we reviewed the brown DX27 our first impression was that it looked rather “Basic yet odd”. Does built in speakers and a colour change make a difference? The answer is “Yes”, the DX27 is nothing amazing but certainly more interesting to us than its DX27 and DX21 cousins.

With its black exterior the DX27S finally looks like more like a proper 80s machine, and we were relieved not to see another brown Yamaha synthesizer.

Like the DX27 and DX21 the finish of the surfaces has slight grainy texture that help to reduce the look of fingerprints. This texture was carried over to the DX mark II synthesizers released the following year. Other than surface texture and bright aqua coloured buttons this synthesizer is completely devoid of any design or decorative detailing. The speakers however, are housed within a corrugated block of black plastic. The horizontality of the lines does give this synthesizer some character.

With built in speakers the DX27S was always at risk of looking like a less professional portable keyboard. The speaker design however is substantial and well-integrated with the overall style. While its certainly aimed more towards the amateur musician. It’s certainly no toy.

The DX27 is well built from the same robust metals and plastics used on Yamaha’s larger models, but the textured surfaces add substance with better resistance to marks. The detailing is neat and in fact more seamless than its more famous big Brother (The DX7).

The additional speakers are robust and built out of a durable plastic. Most of the ones we’ve seen have survived in good shape.

With built in speakers the DX27 has the lost the advantage of being a compact keyboard and it has also lost the lip at the ends that make for easy lifting.

We like the speakers for the convenience they provide by not having to connect the outside speakers. The sound quality is reasonably loud and clear but those corrugated grooves do form a visible dust trap. The speakers can also be turned off if you do want to connect to something bigger.

The location of the wheels in the top left corner were never practical but now even worse with speakers in the way. This is probably the one thing that give the speakers away as an afterthought.

The DX27 shared a few components with other DX models such as the slider knobs, pitch bend wheels, and even the Music stand shown above.

Out of all the early 4-operator DX models, the DX27 is by far the rarest and in our opinion also the most interesting. It also has its own soft case that is even more rare.

As an entry vintage FM synthesizer, the DX27S is certainly one to consider. Most people don’t realise how rare they are so you could land yourself a real bargain. Those built in speakers are also quite cool and very convenient.

The Play Book tapes are rare rare to begin with, but this yellow one for the DX27S is one of the most rare of all play books. This one is from Japan and still sealed Mint in original plastic!

The DX27S was the beginning of an era of built in speakers that evolved into the EOS series. Of all the sub-DX models, this rare synthesizer is our pick. Grab yourself a bargain and bang out some Madonna bass lines from the 80s.

The factory soft case was cream canvas with brown trimming, a rather dated retro look, even for 1985.

In Japan, Yamaha relabeled the DX27S as an SDX27S for educational usage in places such as local schools. These had different internal sounds, but were otherwise identical.

The SDX27S had a unique hard case which was made in the same fashion as Yamaha’s older generation of cases, with smooth external vinyl and fuzzy blue interiors.