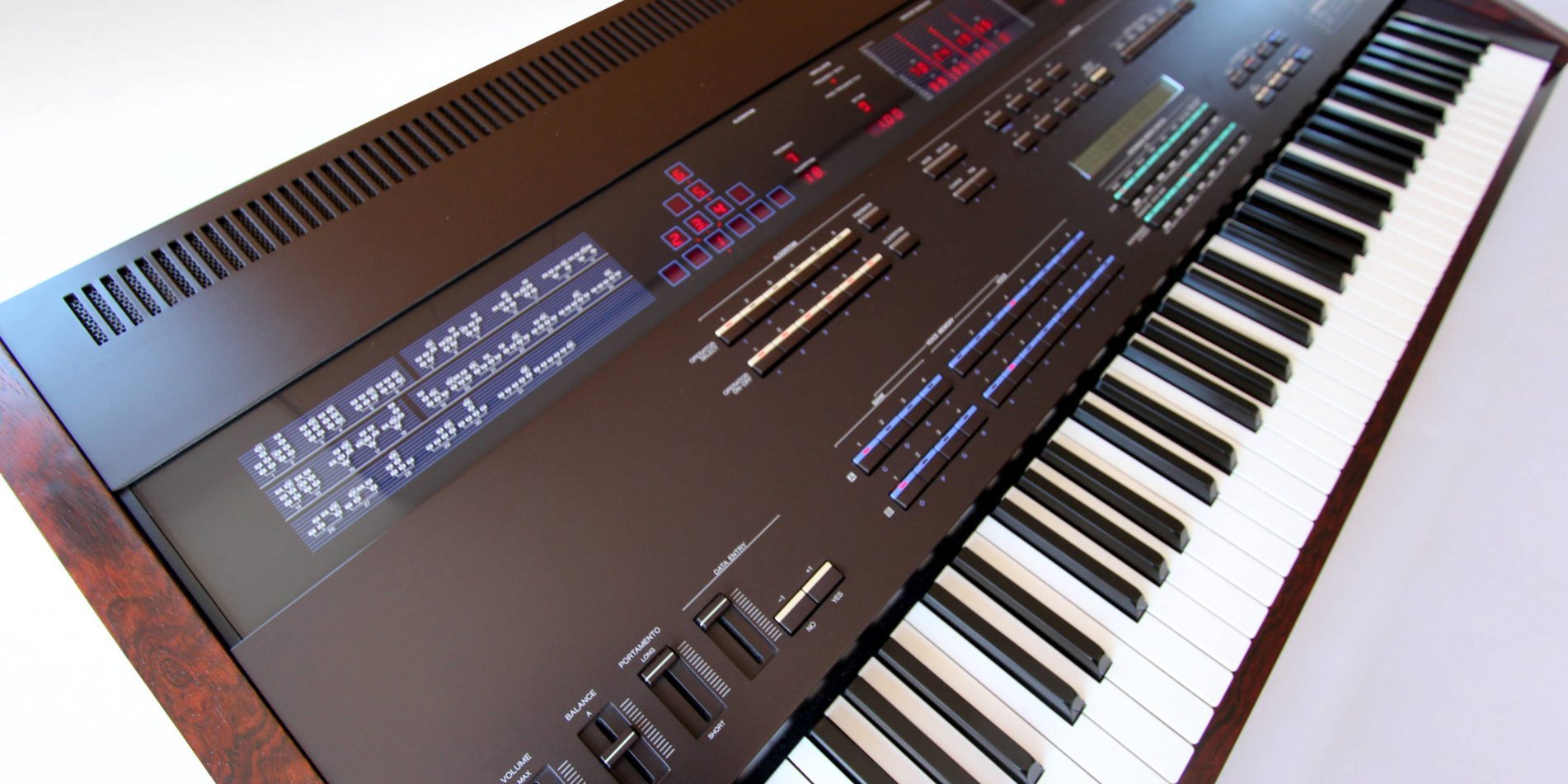 The mother-ship has landed!

This is one review we’ve waited a long time to do – The Yamaha DX1. It was and still remains King of the DX range. Released in 1983 it was the Flagship model and was the most powerful, expensive and advanced Yamaha Synthesizer at that time. In Essence it was two DX7’s rolled into one big beautiful body with 73 weighted piano style keys.

With only 140 known to have been produced this synthesizer is indeed very rare. When new it sold for over $14,000 US (10,000 Pounds in the UK) which explains its limited production run and why only the most rich or famous musicians had them. Today $10,000 could possibly land you a beat up one that may not be 100% working. Mint examples do exist and with original accessories could be anywhere from $25,000 upwards.

The DX1 is collectable and many of them belonged to famous artists such as Elton John, Depeche Mode and Pet Shop Boys (just to name a few). Ultimately it was too large and heavy to be practical, which was why it was shortly followed by the DX5. The DX5 was almost identical but more compact and affordable. From our research most DX1 units were made as 100V, but units made for 220V-240V regions came with a voltage selector on the rear panel.

Two words immediately come to mind- “It’s HUGE!”. Every DX1 owner will try to express this, but you really have to see it to say it. In a time when everything was getting smaller the DX1 seems an unnecessary giant. Nevertheless, it is impressive and exudes quality throughout.

While the DX5 that followed was significantly more affordable, it has never come close to being a DX1 with all its beautiful Brazilian Rose Wood panels and a space ship like control panel. The DX1 is a sight to behold and when you turn it on you really feel like you’re in a Sci-Fi movie scene.

The music stand is identical to the ones that came with the DX7 & DX9. However it looks proportionately too small and out of place on the DX1

This flagship synthesizer is indeed a Beautiful Beast. With so many buttons and LED lights it looks powerful yet still retrained and intelligent. The front panel is organised into horizontal panels with several bands of buttons and displayed information. Across the very top is band of ventilation slots. These bands are then framed with the Rosewood end panels that are approx 2 cm thick!

We have to remember that this is a digital instrument in a time when digital was only beginning to gain popularity over analogue. An anologue machine of this size would comfortably hold lots of knobs and sliders everywhere. The DX1 is dominated by sleek buttons which gave a more futuristic presence. It feels like a computer and perhaps less personal or user friendly than analogue synths of that era.

The Rose Wood panels finish all sides precisely with strong architectural geometry. The end panels are in fact the most ornate part of the machine as all other sides are essentially large flat slabs of metal with the exception of one continuous Acrylic Band towards the top of the front for all those lovely LED numerals.

The DX1 is huge, and this is immediately obvious when noticing the amount of machine located above the 73 piano style keys. The DX1 is proportionately out of balance in our opinion but as “The DX King” we can forgive this slight imbalance. As with the DX7 and DX9 we are also critical on the colour choice as all that brown feels more in keeping with the 1970s. Imagine how cool this might have been in a charcoal grey or brushed silver colour instead? That aside Yamaha chose rather cool tones of lavender and aqua for its graphics. There was even thought to the rear panel with small graphics of the foot pedals above their respective port holes.

Yamaha’s LG-200 stand was the largest from Yamaha at the time and most suitable to support the DX1.

Yamaha have always demanded quality in their products and the DX1 was a product to achieve nothing but the best. The DX1 packed in all the best that Yamaha had available in order to earn its hefty price tag. The Rose Wood, piano like keys and digital displays deliver both quality and technology with minimalistic styling. Is it value for money? Only those with more money than they know what to do with, would have considered it. It was impressive, but in our opinion not amazing enough to demand over $14,000 US (back in the early 1980s!!!). Then again, we have to remember that in its day it would have looked and felt like a computer from a space ship!

Having said that it’s hard to find this level of craftsmanship nowadays and in today’s market this synth is worth every cent of its original price tag. There is quality and design attention in almost details. Even the underside has a beveled black base with perfectly cut round ventilation holes. The buttons and controllers all feel nice to press and the keys are weighted and built to emulate a grand piano.

The DX1 has such an exciting front panel that most musicians (even today) would find their creative juices flowing. The layout is ordered and organised to be practical and look balanced at the same time. Compared the DX7 it’s so much easier to program and understand because of the generous and clear digital displays. Although the DX7 had an innovative flat membrane panel for buttons, they don’t feel good to press in our opinion. The DX1 has more conventional style buttons that feel like proper buttons and we think it suits the masculinity of this machine.

From a serviceability perspective the DX1 was made for maintenance with a front panel that lifts easily for access to all its internals. In its open position all electronics are well spaced and easy to access for adjustment or removal.

The Keys are made with Yamaha grand piano specifications and many DX1 owners believe they are the best feeling keys ever. This explains why most DX1 owners have continued to use it as their master keyboard.

Some units had this rare voltage selector. [Image courtesy of Volker Schmidt in Germany].

For all Synthesizer collectors or even just a collector of vintage things in general, the DX1 is a Holy grail. Unfortunately, they are extremely hard to come by because many are still with their original owners. Not only is that testimony to their build quality but to the fact they still sound great and very usable as a master keyboard.

With only 140 ever produced you will need to be patient and persistent. Spare parts are no longer available through Yamaha, so if you plan to settle for beat up example, you need to be tech savvy and handy with the tools. The mint examples that exist have mostly survived through storage in hard cases. A hard case is highly recommended if you intend to transport your DX1 as this beast is not only large but weighs in at 100kg. When a mint example does come up, you’ll need to brace yourself for the price. In our opinion an average specimen is worth over $20,000 (US) and anything less would be a bargain. Ideally it will have all its original accessories including sound cartridges, music stand and manual.

In regards to optional accessories, the DX1 also had a factory case and required the Yamaha LG-200 stand to support it. The LG-200 is quite rare but the original factory case is probably rarer than the synth itself. The case has a bright red textured fiberglass casing.

The time to have invested in a DX1 was in the mid to late 1990s, when it might have been considered a bulky out of date piece of hardware. Since then, prices have steadily gone upwards and they have become increasingly harder to find. When they do become available they are often snapped up by extreme collectors or museums. If you own one of the 140 built, you have something quite special and probably know it by now. The DX1 is simply magnificent and a sight to behold. We’ve done our best in this review to capture all its glory but photos don’t do it justice, so see it in person if you ever get the chance.

If you do happen to be one of the lucky 140 (assuming no one owns more than one DX1), we highly recommend searching for an original LG-200 stand to be true to period. An original red case to go with your DX1 could be a once in a lifetime event, so don’t miss the opportunity if it ever happens.

The synthesizer in this review was purchased in October 2003 after an exhaustive 3-year search. It came in response to an online wanted advertisement. It is a 100V unit with serial no. 1003 which implies that it was the 3rd one off the production line. We understand that it was originally owned by Japanese musician who took it to the USA. A deal was eventually made and this DX1 was transported to Melbourne where it remains a permanent part of the WOLF Collection. It is in near mint condition and is in 100% working order. Further to its immaculate condition, this DX1 is particularly nice as the wood veneer has maintained richness in colour and has expressive grain lines. It is complete with many original accessories including:

We are particularly pleased and proud to own the original red factory case that is even more rare than the actual synthesizer itself. The Wolf DX1 is potentially the most complete one on the planet. Does any one have the original box we could add to it?

The DX1 came with 3 cartridges that are specific to this synthesizer with the labels showing “DX1”.

All Manuals available for the DX1.

Comparing scales between the DX1 and DX7 cases. These are the brightest colours ever seen in Synthesizer hard cases.

The LG-200 was the correct stand for the DX1. It is almost identical to the smaller LG-100, but significantly more rare.

The DX1 never had its own brochure. It was featured in a 13 page Catalog/Brochure titles “Yamaha DX series”, which also included the DX7 and DX9 models.

The DX1 was also featured in various other Yamaha product catalogs such as this 1984 publication for Yamaha Combo products.

This 1984 Japanese product catalog is the only publication we know of that features the Illusive red case designated as the LC-1H for sale at 120,000 Yen .

This 1985 Japanese product catalog has the DX1 for sale along side the newly released DX5.

This Japanese 1985 product catalog features the DX1 along side the new DX5.