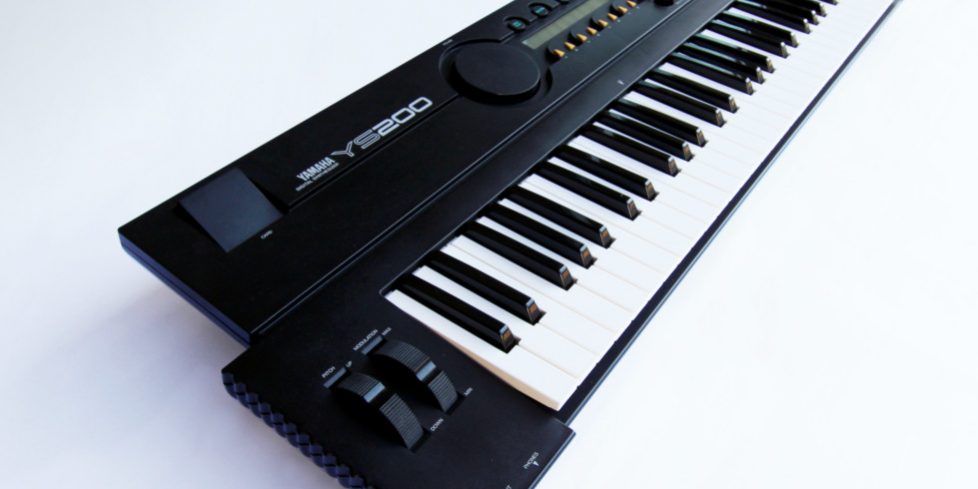 The YS-200 was a 4-operator FM synthesizer released in 1988. At a time when Yamaha was flying very high from the successes of their DX range, this keyboard was experimentative in its design. With a built in 8-track sequencer it was also Yamaha’s first attempt at a workstation.

They are generally available on the second hand market and worth anywhere between $200 to $500 (aust) depending on condition. They could be worth more in mint condition with original accessories but it’s probably not value for money to spend more that $500(Aust).

The YS-200 had a smaller brother called the YS-100 which was virtually identical but without the on-board sequencer. There was also a B-200 which was a YS-200 in a completely different looking body with built in speakers (popular in Japan). Japan also sold the YS-200 but it was labelled as the EOS-YS200.

It wants to fly away with your imagination.

It was a funky looking synthesizer back in 1988, and it’s still funky looking today. This has to have been one of the most experimental designs produced by Yamaha of the last century. At a time when things were starting to become sleeker and more streamlined the YS keyboards have always looked rather odd in our opinion. Its quirky design cues would have been better received in the early eighties when big hair and studs was more fashionable. Nevertheless, we respect Yamaha’s bold attempt to try something new and put themselves out there.

The black colour was in keeping with all other synths in Yamaha’s range at the time. However, it does have a grainy texture. There is a deep groove that runs the length of the machine to divide the unit into a lower half for the keys and an upper half for the controls. The keyboard section is flanked on either side by corrugated ribs that curve down and under the machine. This helps to give the illusion of a “floating keyboard”. The bender wheels are finally wider and feel better than those on previous models that had half the width.

The top half is where this machine stretches your imagination with a variety of different circular, rectangular and triangular forms. It has order but is far from symmetrical and in our view slightly off balance. On the top left is an angled wedge shape that is the card slot. This was the first Yamaha synth to have a card slot as opposed to the thicker cartridge slots. Following from that (and not quite in the centre) is a giant volume dial with a tiny pin hole to show its positioning. This has to be the largest dial on any synth ever made?

The whole machine is positioned on an angle to make it easier to view the screen and controls. This angle is most obvious from its side profile which we feel is quite an attractive perspective. There is good design consideration throughout and it all appears to have logic and purpose. Even the rear panel has a design attention to the area for cable inputs.

The side profile is quite cool.

This is one of the first Yamaha synthesizers we know, where the entire outer body is of plastic components. The lack of metal reduces weight but also questions the strength and robustness. It feels more suited to home use than on a concert stage. The body is molded plastic and creates a very 3D feel. However, it does make the unit feel a little hollow, and together with the overall lightness, you don’t get the impression that it’s a solid well-built machine. Regardless we think it was well made as the plastic is thick and seems to have no paint. The black colour is in the plastic and together with the texture, it reduces the appearance of scuffs or scratches. Most that you find will still present very well cosmetically.

The benders work well and in fact seems to be the only design innovation that was carried forward to the V-50 and SY synths that followed on in 1989 and into the early 1990s.

While we appreciate the variety of different button shapes and textures, we don’t think any of them feel particularly good to press. The deep recessed areas also tend to collect dust and are hard to clean.

The grooved end panels feel nice to touch and make it easy to lift and move this machine around.

It’s a funny one to comment on, because on the one hand it was a serious design experiment, that was very brave and worthy of applause. On the other hand, it does not evoke a lot of emotion in us because while unique, it looks more odd than beautiful. The fact that only the bender wheel design was re-used is testimony to the success of this design experiment. Having said that the YS does represent a series of firsts, including the voice card, molded plastics and on-board sequencer. It can also boast about having the largest volume dial and triangular shaped buttons.

From a collectable perspective we would say it’s one to have for the heck of it, if you have the space and appreciate design. It was certainly innovative and they can be found at very reasonable prices.

The only synthesizer we know of with triangular buttons.

We remember seeing this new in 1988 and over time have come to appreciate its innovative qualities and the braveness of its designers. Its looks unfortunately have yet to grow on us. Good design does not have to be beautiful but the YS just looks a little wrong somehow, and it may take a few more decades for that to change.

The YS synthesizers had just a semi-soft case that looked similar to the DX11/V2 soft case but with a thick leather textured vinyl material.

Left- The YS-200 featured in the After Touch Magazine. Right- The official YS series brochure.