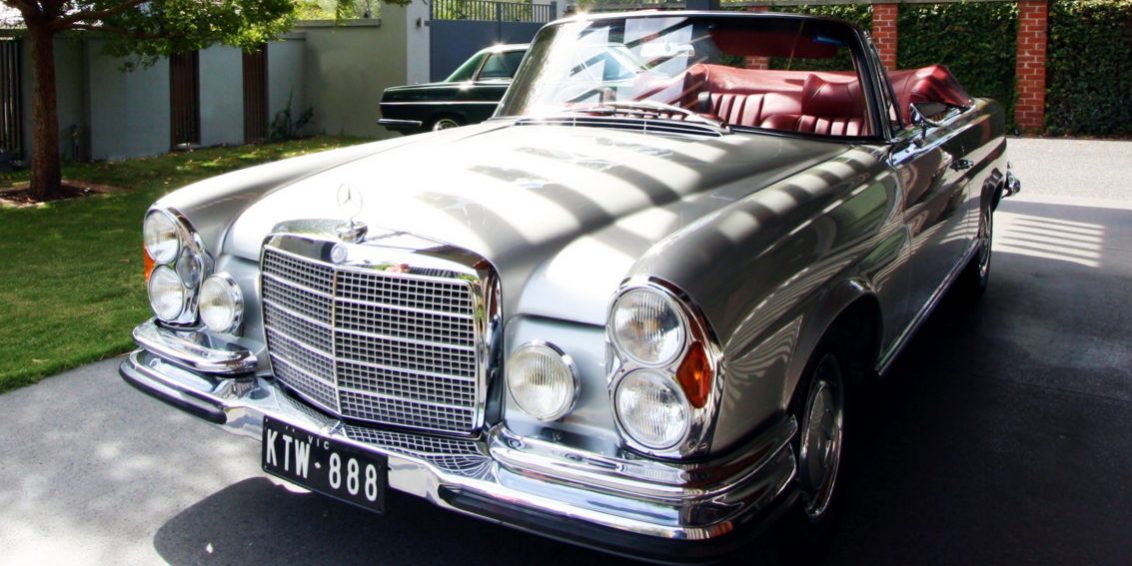 Interesting and factual information may be provided, but our review aims to deliver insight into the eyes and mind of designers.

King of the Road.

1232 Cabriolets were manufactured from 1969 to 1971, which was very little, even in those days. Only 68 Right hand drive models were built with only 5 originally imported into Australia. A concourse restoration or, low mileage original example is worth anywhere from $600,000 to $800,000 Aust. They are particularly sought after as these cars are not only collectible but still very modern to drive. Furthermore, they are proper 5-seater cars which are uncommon as a convertible, especially today.

The W111 Mercedes were one of the first to have automatic transmission and power steering which are two things that make them still very modern and easy to drive. This car is not to be confused with the W111 280SE cabriolet which looks identical but was a V6 and did not have the 3.5 badge on the rear right corner of the boot.

The word that comes to mind is “Presence”. When this V8 cruised with its top down it was King of the road, and we think it’s still King today. The lines and proportions are masculine but elegant. The top has to be down or else it’s lesser coupe equivalent might steal the limelight.

This car is not ostentatious like a Rolls Royce or sleek like a Ferrari of the day. It’s much more restrained for a car that cost just as much but somehow it feels more purposeful and powerful. The lines very deliberately connect and flow without shouting any big gestures. Every detail is well considered and appear together as one language- the Mercedes Synergy between practical engineering and beautiful design. The front is where the car captivates most because of the large classic Mercedes grill flanked by Baroque headlights. All that chrome oozes royalty and power.

The car is relatively large, and we can’t say that it’s particularly sleek or sporty. With large sheets of relatively straight and flat steel it is bulky but architecturally elegant at the same time. Original Metallic colours are more rare than solid colours and the WOLF colour of Choice for this car is silver, followed by Tunis beige metallic (light gold), gun metallic grey and Metallic Cyprus green.

Internally the car continues with an understated elegant theme. The dash and instruments are simple but beautifully crafted and well presented. The large steering wheel and chrome ring dominate ones first impression, followed by the large circular instruments made by VDO which Mercedes shared with Volkswagen and Porsche models in the day. The leather housing of the speedo instruments is a work of art with detail that is hard to replicate. The car in this review has genuine Zebrano wood veneer in its interior and together with all its chrome trimmings make for an unsurpassed visual treat. It is classy, beautiful and very luxurious.

When examining the build quality it’s hard to believe that these cars are about half a century old. Compared to other cars of the era the engineering and craftsmanship seems superior. There is so much genuine wood, leather and chrome trimmings that are combined to be both enduring and comfortable. We were particularly impressed with how the components are seamlessly assembled. The only visible screws are those holding in place the chromes headlight frames. Everything on this car feels sturdy and substantial, in keeping with  Mercedes reputation in that era for building nothing but the best.

As a V8 this car was fast in its day and can still accelerate faster than you’d expect for such a heavy car. It was a relatively large car for its time but by today’s standards there is some sportiness to its strong straight lines.  With the top down we felt regal but no showy. While that 3.5 badge at the rear indicates a lot of power there was no temptation to push the car hard like you might with a Porsche or Ferrari. The smooth and contemporary drive will make you want to cruise all day feeling classy and stylish. The Radio has an old school charm with an earthy tone from a single speaker located under wooden grills on the top of the centre dash.

This car is rarer than the Gullwing, so by comparison seems highly undervalued. Among Mercedes enthusiasts however this car is a Holy Grail and its true worth is well understood. Unlike the Gullwing it is still modern to drive, practical, and can fit up to five. Affording one is only half the challenge, particularly of you want a right-hand drive car. Collectors don’t part easily with them so the hunt for one will be exhaustive and difficult.

While these cars are about half a century old, they are relatively simple mechanically with a strong following and support for parts and information. With its German engineering, a good example will easily last a lifetime.  If you are lucky enough to own one you have a solid investment that will continue to appreciate steeply for many more years to come.

The 3.5 Cabriolet is a dream for many and even those with the gold can’t always own one (in RHD in particularly) due to their scarcity. Most people have to settle for the 3.5 coupe which is a beauty in its own right and not a bad compromise. If you do happen to be one of the lucky few, then take it out at every opportunity for a drive. You’ll turn heads without feeling like you’re showing off and it’s still modern enough to get you around practically and comfortably.

Original silver cars were very rare in Australia and one with a black, burgundy or green interior is simply the best in our opinion. Purists will think it’s wrong to change the cars colours and that it can affect value but we differ in opinion. These cars are meant to make you feel special so you deserve to make the colours both internally and externally work to your character. If you can afford to own one of these then you can probably afford to change it back to original any time you want anyways. Our only stipulation here is to use correct Mercedes factory colours and materials true to the model and period.

The radio on W111 cars was optional. Those without the radio would have a blanking plate, similar to the one shown here. These plates are actually quite rare as most cars had radios so these plates were thus often discarded.

Original Mercedes leather key in burgundy to match the interior of the car.

Original factory brochure came in blue and green covers. The green one is significantly more rare.