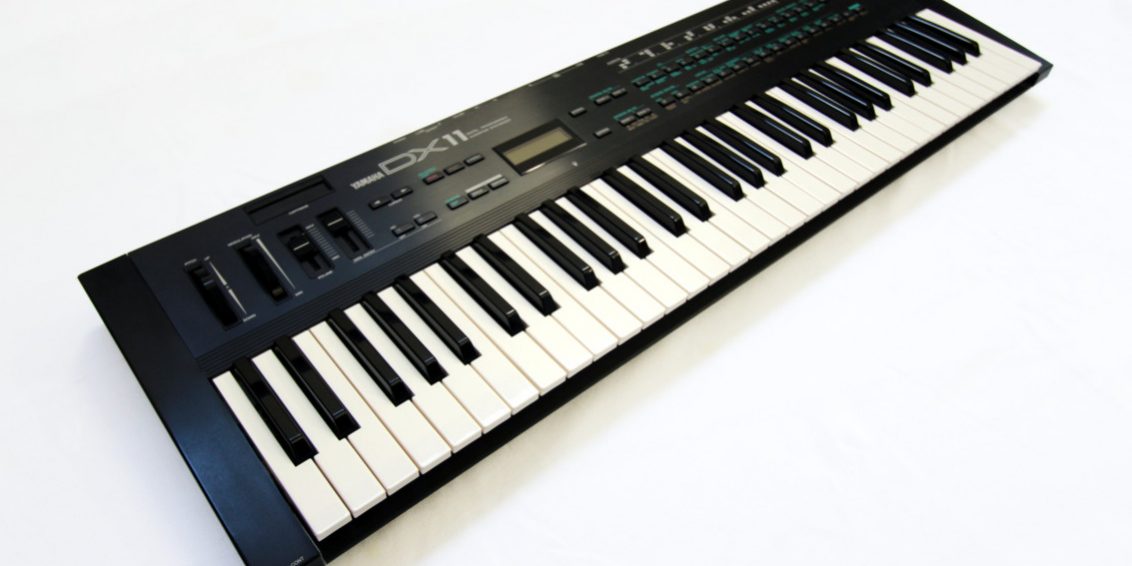 The DX11 was launched in 1987 as Yamaha’s new 4-operator FM synthesizer, to follow on from the DX21, DX27/27S and DX100. It was the smaller, and more affordable little brother to the DX7 mkII models.

The DX11 was approx. $1000US when new and today you might pay less than a third of that for a good working example. Mint ones with accessories and case could command even more.

The DX11 was known in Japan as the V2. At only 63.3mm thick it remains the thinnest synthesizer Yamaha has ever made with full sized keys.

Compact and light but still professional.

We’ve been looking forward to this, because the DX11 is one of those synths that was impressive in so many ways yet often overshadowed by other Yamaha synths. It is relatively unassuming because of its size and simple looks but upon closer examination one has to admit that this little unit is rather unique. Our first impression is that it’s just “SOOOOO thin” for something from 1987! For an instrument with full sized keys it may be the thinnest synth of all time.

Despite its slenderness and light wight it still has an air of professionalism about it. The DX11 wants to step out from the Shadows of the DX7, but only through attention to its detail rather than by screaming any bold statement.

At only 63mm thick this could be the thinnest Synthesizer ever?

The DX11 appears as like a single sheet of metal that bends sharply on an angle down the rear. From the side it looks like a slender black wedge with only the pitch bender and keys as obvious protrusions. While it looks like a straight line, the end panels do have a very slight curve. It’s an interesting notion that seems unnecessary but perhaps it softens the overall look just enough to make this the friendly affordable option it was always intended to be.

The overall layout is similar to its DX21 and DX27 predecessors. The pitch bender and modulation wheels are located on the top left of the front panel, and this allows both end panels to be just a few cm wide. The wheels and sliders appear to be similar to the DX7mkII but the screen and buttons are proportionately smaller.

Other than the gentlest curve on the end panels this synth only has tight angles. The bend from top to rear is particularly tight and we like the way it bevels on a strong angle so that the name “YAMAHA” faces slightly upwards to the sky.

Where the keys meet the main face plate, Yamaha designed 6 grove lines that run the length of the keyboard. These are the only decorative feature and look identical to those seen on Korg’s legendary M1 released shortly after in 1988. Although the M1 had one groove line less, it seems a very coincidental detail and we suspect there was some design crossover since Yamaha did have some ownership of Korg at that time.

Yamaha curiously decided to do away with music stands, so the DX11 was their first synthesizer to have no holes in the rear for stand attachment.

It’s well built, no doubt and matches up its big brothers in craftsmanship. The DX11 has no visible screws, not even on the rear panel. The black anodized aluminium is beautiful and very similar to those found on Roland synths of the same era. The flatness of the front panel and minimal controls reminds us of Roland S-50 Sampler which scored a very high 8.3 (reviewed in April 2018).

Despite its slenderness and lightness, it feels tight and the keyboard has the same high-quality feel as the Flagship models.

The screen says “How are you?” upon power up and we believe this was a first for any Yamaha product. A larger screen is always better but would potentially make the front face look cramped.

Despite the pitch bender being out of place it still works well due to the thinnest of the machine. The sides are easy to hold and at only 7kg this is a highly portable synth.

All controls are clear and simple with neat buttons along two rows. The buttons are almost half the size of those on the DX7 but feel nice to press and you can still slide your fingers continuously from one button to the next as famously done on the DX7mkII.

As with the DX7mkII the power button also has its own recess with design detail to help prevent it from being accidentally pressed.

The DX11 is underrated, underestimated and in our opinion a little undervalued. Its elegant looks and slender proportions make this one of the best designed synthesizers of all time in our opinion. That alone should make it desirable but as a 4-operator synth it will always play little brother to its 6-operator DX7 brothers. And because its so minimalistic and clean it continues to remain shy and rather unnoticed.

The hard case is extremely rare and is the first to use a new durable black plastic which continues to be seen on many Yamaha cases through to modern times.

Since the dawn of the DX7, Yamaha had a design philosophy that was about seeing the musician’s hands and thinner synthesizers allowed this. The DX11 was true to this ethos and even the keys could be seen, especially from the sides. Although the DX11 will never achieve the same classic status as the DX7 models, it should be respected for its design innovation, especially its incredible slenderness. In our opinion the DX11 is more elegant than the DX7mkII and one of the best designed synthesizers of the 1980s. Geometrically is just as strong as the mighty DX1. However, unlike its DX1 grandfather it won’t take up much space and even its hard case is relatively thin and easy to store away. If you don’t mind using a step-down transformer, the V2s (Japan’s DX11) in Japan tend to have survived in good condition and occasionally come with original cases.

Does anyone know why the DX11 was called the V2 in Japan?

The Japanese V2 manual was significantly thicker than their blue European cousins.

The DX11 Soft case (SC-V) was quite a nice design with a grooved pattern in the vinyl on the lower half.

In Japan the V2 had its own soft case with V2 logo. In the World of soft cases, its quite a rare one for Yamaha.

The very rare Yamaha LC-V, possibly the thinnest Hard case made by Yamaha for a synthesizer.

According to Yamaha trade literature there were ROM sound cartridges available, but only a few compared to the DX7 and are extremely rare to come by. This V2 Vol.1 ROM out of Japan, is the only cartridge we’ve sighted in the flesh.

Right- The official brochure. The graphics are absolutely 1980s!

The DX11 was featured on the cover of two different issues of Yamaha’s After Touch publication.