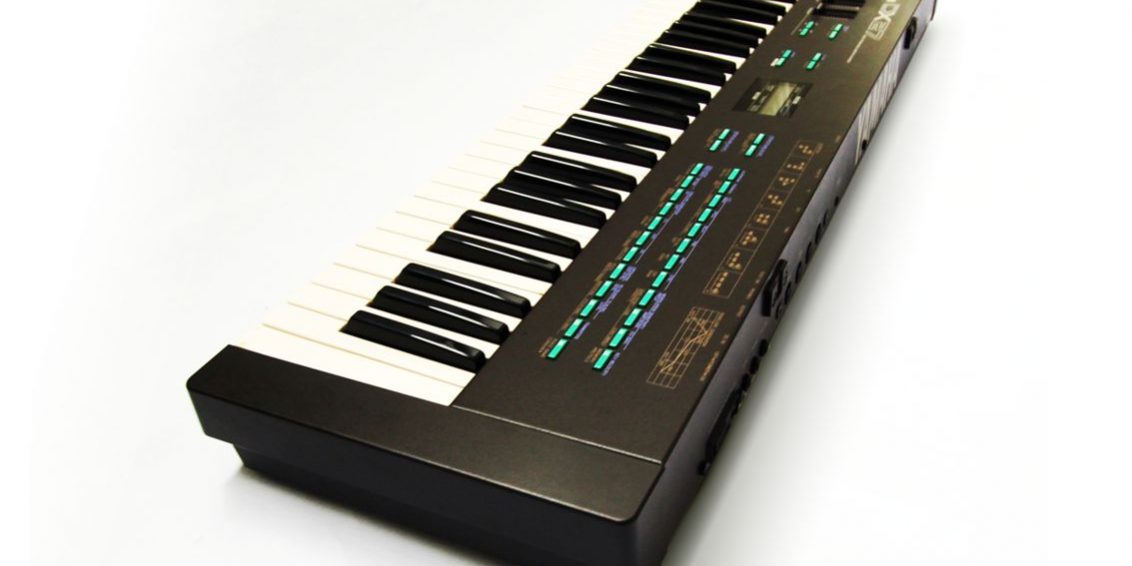 Is this the forgotten Yamaha Synthesizer?

The Yamaha DX27 was introduced late in 1985 and has been described as a DX100 with 61 full sized keys. It was designed as a consumer level DX synthesizer for those that could not afford a DX7.

The DX27 looked physically near identical to the DX21 that came out earlier. It was more affordable because it lacked the ability to layer sounds together. While possibly considered the runt of the DX family, this synthesizer can at least lay claim to being the last brown coloured synthesizer.

When we reviewed the DX7 three years ago, our first impression was that the brown looked dated, dull and not in keeping with 1983. By 1985 that brown was even more dated and we think Yamaha should have made the DX27 black especially as it was essentially a big DX100 (which was black in colour). Apart from colour the DX27 was relatively basic with a look that was in between a DX100 and a DX7. The result in our opinion was rather “Basic yet odd”.

As a simpler, cheaper and more compact DX synthesizer the design solutions all worked. The controller wheels were moved to allow the end panels to be minimal in size. This allowed for an overall reduction in length. The depth of the instrument is roughly the length of Two white keys.

The finish of the brown surfaces has subtle grainy texture that help to reduce the look of fingerprints. This texture was carried over to the new DX mark II synthesizers released the following year. Other than surface texture and bright aqua coloured buttons this synthesizer is completely devoid of any design or decorative detailing. It is rather featureless with nothing to visually remember it by.

The DX27 is well built from the same robust metals and plastics used on Yamaha’s larger models, but the textured surfaces do give it a little more character and resistance to marks. The detailing is neat and in fact more seamless than its more famous big Brother (The DX7).

The controls are arranged in two straight lines that run the length of the keyboard. We prefer the buttons over the ones on the DX7 and DX9, but are a little too small for our liking. Because of their size, there seems to be too much blank space on the front control panel section.

The location of the wheels in the top left corner is not as practical takes a bit of getting used to. Yamaha has never since placed their controller wheels in that location.

The screen is similar in length to that on the DX7 and was probably too small, even for its day. Those basic end panels do have a lip on them that make good handles for lifting and maneuvering.

The DX27 is the least exciting DX synthesizer and rather bland from a design perspective. If you love the DX100 (and there are DX100 fans out there), and want one in a larger body, then the DX27 is the right idea. However, it will also have to compete against the DX21 which looks almost identical but with some superior features. As such we think The DX27 will be the forgotten DX or FM synthesizer from Yamaha.

It is likely always to remain affordable so if you want a cheap FM synth then this could be the one. From our research it is capable of some cool sounds further to those famous Bass instrument sounds. Interestingly they have survived well, as it is rarer to find a beat up one than a mint one.

The original accessories can make for a bargain purchase, as most sellers don’t mark up their prices significantly for included accessories.

The DX27 shared a few components with other DX models such as the slider knobs, pitch bend wheels, and even the Music stand shown above.

The original brochure, which illustrated its connection to the DX100 on the back page

The original hard case for the DX27 was a scaled down version of the DX7’s brown hard case but in black. The brass metal-ware is a classy touch .

The DX27 also came with a soft carry case and is the only Yamaha synthesizer case we know of, to feature a bright red interior.

The DX27 is probably the least interesting, with the lowest design score of all the DX models we’ve reviewed. However, it’s still a quality instrument so in terms of value it is definitely a bargain vintage synthesizer. For collectors the DX27 will possibly be the last one required just to complete a full set of DX synthesizers.

The DX27 Came with an easy manual called the Play Book.