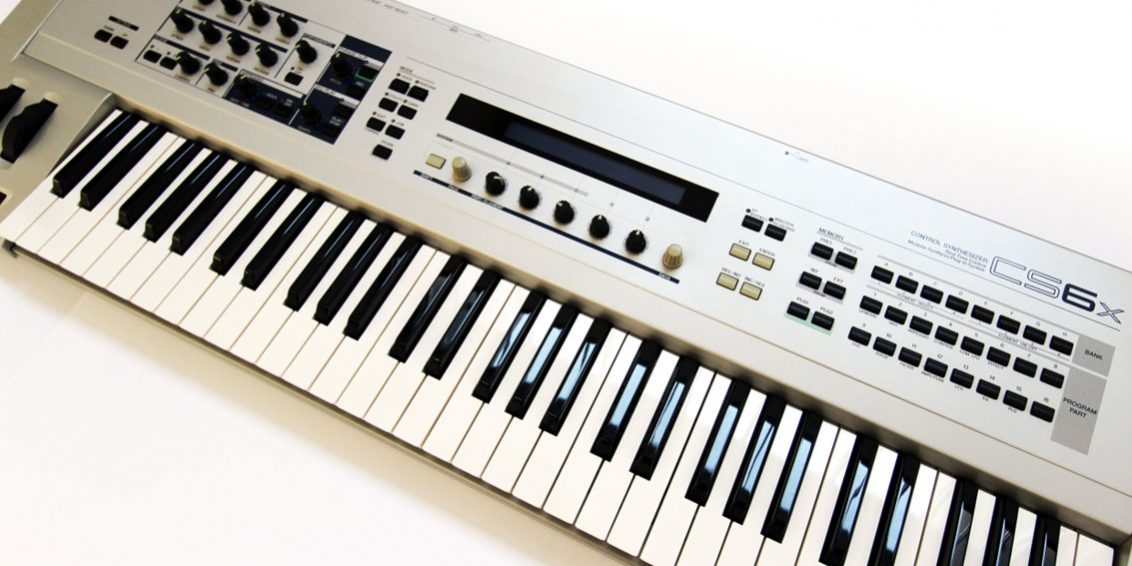 It’s not the flagship.

Introduced in 1999 the CS6x was Yamaha’s last synthesizer of the 20th century. It has often been described as an evolution of the CS1X, CS2X and AN1X combined. Intended for dance and trance music, it was also designed for real time control and live editing.

The CS6X sits slightly in the shadows of the EX5, but with the advantage of being thinner, shorter, and lighter. It was more affordable and as such was quite popular. By comparison to the EX5’s which can easily fetch over a grand the CS6x is arguably more versatile, and can be found for well under a grand.

The CS6X marks the end of Yamahas old school synths, and the beginning of their MOTIF series which follows similarly in colour and certain design elements.

Design look for a new century, but it feels more like a new DX series?

The CS6x looks serious and sensible at the same time. The silver is refreshing though it isn’t exactly new since we saw it first on the CS2X and also on the limited edition EX5S. It has knob controllers under the screen as seen on the EX series, and more on the left side as seen in the CS synths. With nothing particularly innovative aesthetically we can only describe it as a rather average looking synthesizer. In fact, the small screen actually makes the CS6x look older than it is, and you might even fool people into believing that this synth was in between the DX and the SY series.

The CS6x is devoid of any ornamentation and designed purely from a functional/performance perspective. All buttons and knobs are arranged and organised with clear intent and are generously spaced.

The ends have a subtle curved shape which in our opinion confuses the overall straight and rigid body shape. We think a more angular or squared treatment to the sides would have made more sense.

There is some interesting detailing such as where the end panels meet the keys and with the rear corners but they are subtle. This synth is designed for business and everything is directed to sound and control. The metallic silver paint is probably the main aesthetic feature of this synth.

A few very subtle curves are detailed into the design.

The main front panel is single metal sheet that seemingly folds at 90 degrees down into the rear panel. It’s probably too thin for a controller instrument and we’ve noticed that most have dints on the front panel from live action.

The buttons themselves are from the EX series and feel just as nice to press. The knobs have a good weight and speed which were carefully considered for expressive live sound editing. Some of the knobs and buttons are of a dark cream tone which was intentional, but in our opinion look rather aged and discoloured.

As with most synths the end panels are of light plastic, and do tend to get scuffed or cracked. The rear corners have a bumper/buttress shape that is larger and more pronounced than those on previous Yamaha synths, clearly intended for getting bumped from gigging. The paint finish on the plastic and metal panel is not durable which is very unusual for Yamaha. Its very hard to find an example with clean paint as most are worn with marks or discoloured.

The screen is small for 1999 but it of a high quality.

The screen is far too small for our liking and Yamaha seemed to have been relatively late at every instance to match their competitors with screen sizes. The yellow pixels on dark background is a striking difference and new design we’ve not seen before on previous Yamaha synths. It’s an attractive look that is appropriate to the synth’s night club/trance expertise, and for that we can forgive its size.

For what it is, we feel that there could have been more lights and stuff to go with its techno intentions but as with most Yamaha designs there is sense of restrain. Physically this still looks more digital than analogue.

The rear panel looks practical and unusually the YAMAHA logo is placed on an opposite end to the CS6x name. expansion ports are generously positioned in the center and as with the front panel everything is well spaced and organised.

From our research it’s clear that the CS6x is still in active duty around the World. Like the EX series it’s a collection of Yamahas finest technologies but with a focus on dance music and live performance. It was designed as niche synthesizer but seems to have also matured into a well-rounded and adaptable instrument. As such it’s still in demand and bargains are hard to find. There are significantly more 100V versions out there than 240V ones, so if you don’t mind a step-down transformer you can grab a good one for around the $500 mark. Expect to pay up to $1000 for a mint one with original case. We think the CS6x is still a bit of a sleeping collectible but it could soon start to follow the EX5 as a synth to have.

The CS6x scored just 6.5, which is a reflective of having rather plain and average looks. Even with its silky silver clothing it’s not a synth that shouts at you. If you love dance music, we understand that it has some incredible sounds, and while the prices are reasonably low you could have yourself a future collectible.

The CS6x came with this TOOLS CD

Yamaha’s memory card was first introduced on the CS6X and was a break away from the disk drive.

The CS6x had this hard case and it is rare to find outside of Japan.