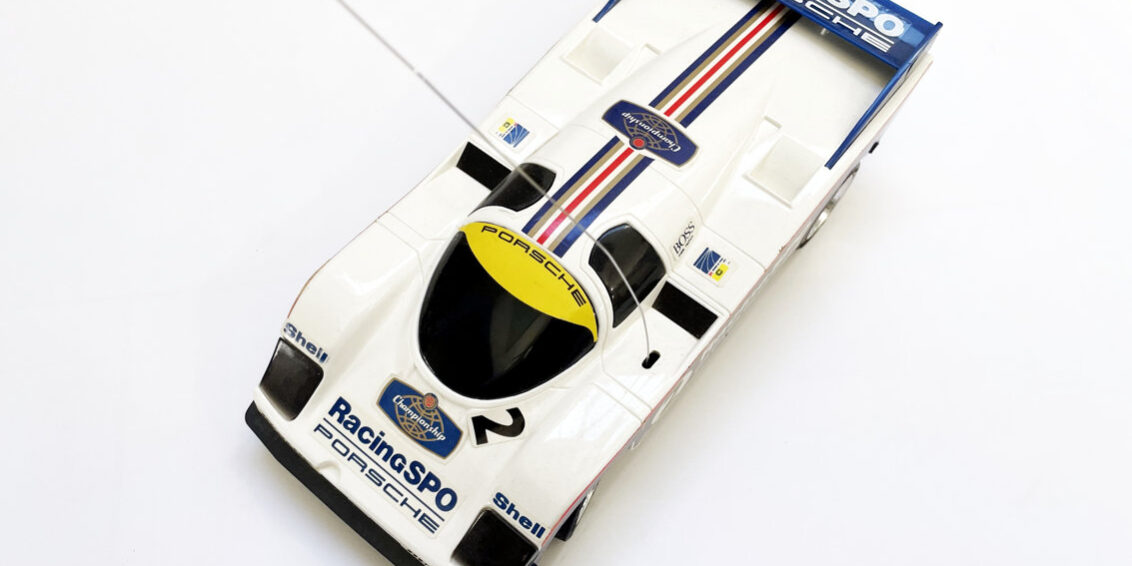 At almost 40 tears of age it can still out run most.

Available in 1983, this radio-controlled Porsche 956 Turbo was made in Singapore by toy manufacturer Taiyo.

This vintage toy is rare and when they do turn up can often be beat up or not working. Finding a good working one will take time and can fetch over $100 for one with original box. A mint example could be over $200.

Taiyo made a lot of radio-controlled cars from the late 70s through to the 1980s. Interestingly they seemed to have a preference for Porsche cars.

Simple and informative packaging aimed at the more discerning.

For a toy that is now almost 40 years old, it impresses because the model bears good resemblance and proportions to the real car that debut in 1982. From our research most RC-cars produced by Taiyo, as well as other toy manufacturers at the time had a toy look around them. The 956 was the first to look like a realistic miniature, and if not for the long antenna could almost pass as a “please don’t touch me” display model piece.

The box says for ages 8 and up? We don’t think so.

Taiyo made great effort to get the shape and colours accurate to the real car. Apart from the number “2” most of the labelling does differ from the real deal, possibly to avoid insult or infringing on copyright.  Other than the very long antenna (normal back in the day), its silver hubcaps are probably the main differences from the real car.

The scale of the car is approximately 1/18 and at that time was relatively small for a quality radio-controlled car. The remote control is equally small, compact and straight forward with no fancy detailing.

The main body is made from a high-grade hard plastic and apart from discolouring with age, many will have survived quite well. The stickers were also from quality paper, so unless damaged from crashing will most likely still be well attached.

The front bumper is made of rubber, which serves as protection for both car, humans and other objects. We like that the tyres are made from real rubber with air inside them. They are even smooth like on real race cars. Overall, this toy is very well assembled with visible screws  located on the underside only.

Although considered small back in the day, this was not a toy to be judged by its size. This Porsche was and still is seriously fast. Speed was the biggest selling features of this toy and that was emphasized in both the “TURBO” graphics on the box as well as on the remote control. When moving forward this car has two speeds. When you push the forward lever, it feels like you hit its limit, but you can push it further still with a bit more force and this releases the “Turbo Boost”. Further to the lever and on/off switch the remote controller has just one red LED in the centre to tell you the power is on. The sides of the controller have a ribbed design to improve grip.

True to the real car this racer is low to the ground so you need to keep it on smooth flat roads to avoid scraping the underside. With that in mind those soft rubber wheels work really well. The rubber bumper does not exist on the real car but essential for this toy to last. Given the super speeds this toy can achieve, it is sure to crack apart on impact if not for this important piece of protection.

There is also a slow and fast switch on the underside which when combined with the hand controller’s turbo booster function, means that this car has four different speeds altogether. The slow speed is probably a good idea when playing inside a small apartment.

You can push the speed lever an extra bit further to get the full Turbo boost.

The Porsche 956 by Taiyo is highly prized and good working ones are hard to come by. Perhaps it was overlooked as result of looking too small, or perhaps the company had too much of a reputation for slower cars aimed at younger audiences. Although the box says “for ages 8 years and up” this was probably too fast and sophisticated for even a 10-year-old in the 1980s.

If you’re a vintage radio-controlled car enthusiast, then the Taiyo 956 is something all collectors should seriously consider. Its speed and accurate looks do justice to the real car which was at one point in time the fastest car in the World.

For a small toy car from 1983, this Porsche is fast. It was innovative for a radio-controlled car in the early 80s because it broke new ground in performance and size. Don’t pass it up if you find a good working one. Take it home, find a hard surface area like a tennis or basketball court and you’ll be amazed at how fast this little car goes.

There were different graphics on boxes for different markets.

In Japan this toy was sold under the TOMY brand with Japanese text.

My best friend brought one back with him from Hong Kong, and in 1983 it really was the fastest toy I had ever seen. I could not wait to own one, and luckily my parents just happened to be visiting Hong Kong later that year. Upon their return I eagerly waited to find a suitable place to race this car, but I forgot that batteries were not included. Patiently I wait another day for some fresh batteries. Then there was the obstacle of my little brother who insisted on chasing and jumping over the car. As much as a told him not to, his listening skills were only as good as 3-year old’s. Within 30 seconds of racing my Porsche was crushed under his feet. I don’t think I even got to experience the “Turbo Boost” function. It would take another 30 years for me to find a good one, and finally rectify a haunting childhood memory with “BOOOOOST!!!!”.