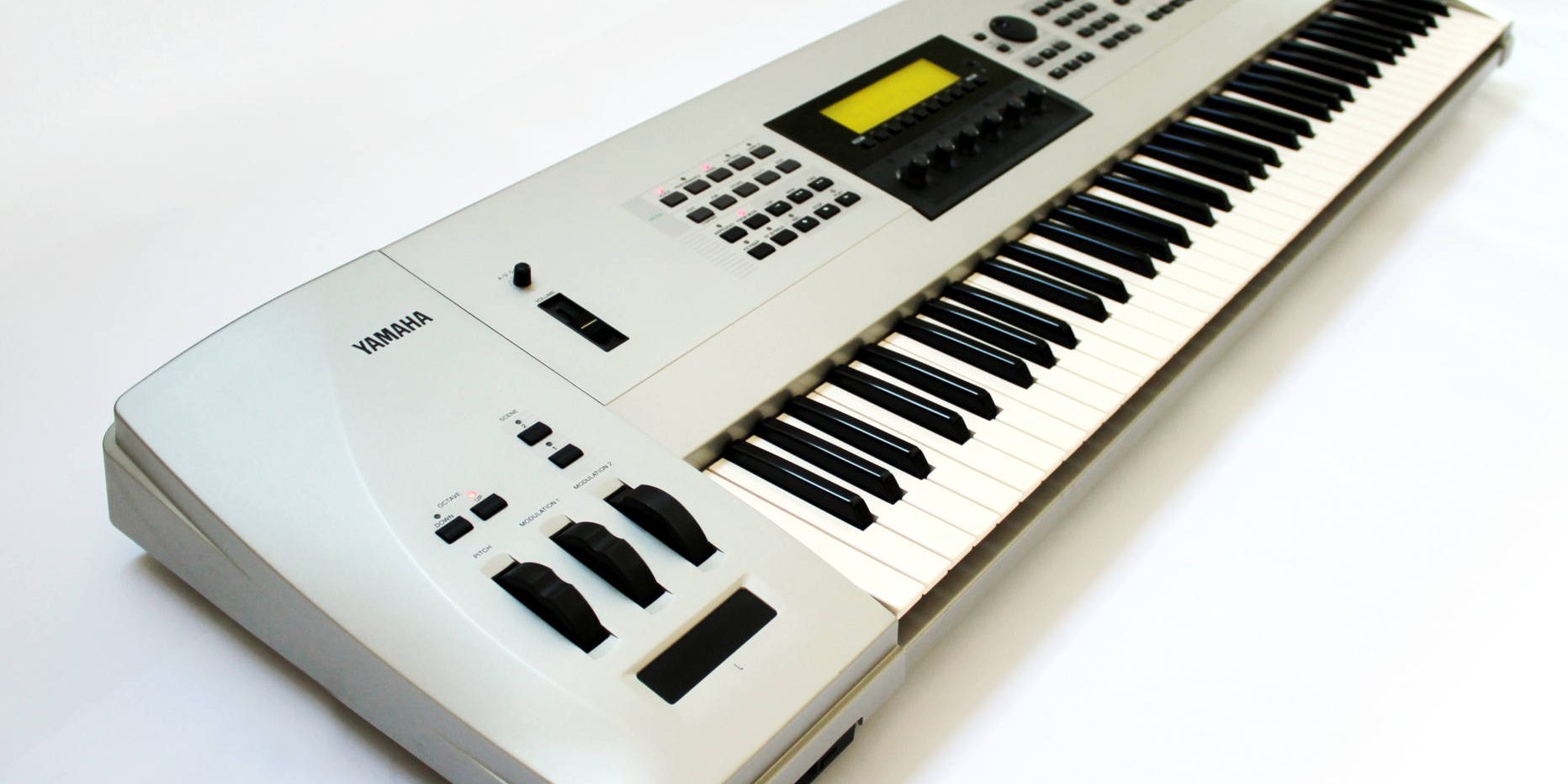 The EX5 was first released in a blue coloured body in 1998 and at that time featured more than any other Yamaha synth that came before. It combined four different tone generators together with sampling capabilities. While none of it was particularly new in technology, the combination of many things made it a very powerful workstation and still in use today. The EX5S in this review was a limited-edition model with a silver body. It was known as the Millennium edition and Yamaha had in mind to produce 2000 units to coincide with the new millennium (the year 2000). Only 500 however were known to have been released.

With 500 units out there in the World they do come around more often than the DX7C which was limited to only 100. Most silver EX5’s seem to live in Japan and come with and original hard case. Although they are a special edition the EX5S was such a powerful machine that we doubt anyone purchased them as a collectible to be kept in a glass case. Furthermore it was priced at 298,000 Yen which was the same as the blue model. As such they do tend to show some signs of wear. Expect to pay anywhere from $700 to $900US for a good EX5S. If you do manage to find a MINT example with its case, we think over $1000 is reasonable.

The EX5S was Yamaha’s second attempt at a special edition synthesizer, and follows on in exclusivity from the very rare DX7C (reviewed on 6th Jan 2018). Silver seemed to have been trending at Yamaha at that time with both the CS2X and CS6X as silver coloured synths released in the previous year. It was a colour that then seemed to follow on to the new Motif series in 2001. We did not have a CS synth to compare but we believe the silver tone of the EX5s may be slightly warmer.

Unlike the DX7C which had a unique music stand, and manual to compliment the limited edition, the EX5S was identical to the standard blue versions with the exception of colour and graphics on the back panel.

It’s a big synth that seems to suit the amount of power it holds within. Apart from the colour there is nothing particularly out of place to grab your attention. Everything looks very familiar in terms of controls and layouts. It borrows more from the SY series than its W5 predecessor. Infact, it almost completely ignores the W series and feels more like an evolution of the SY99.

While looking more like an evolution than a revolution the EX5 does introduce new knob controllers under the LCD screen and a ribbon controller under the 3 controller wheels. These subtly suggest that there is more available than ever before and invites you to explore.

The layout is significantly improved over the W series, with greater consistency and clarity. While it’s a relatively simple looking machine at first, there are some significant breaks from tradition. The symmetry of left and right end panels is interrupted for the first time. The corner details are all identical but Yamaha introduced a subtle but large “swoosh” shape on the left end. Its almost as if they realised that this synth was going to be rather chunky, and tried to find a way to soften its bulkiness. It doesn’t seem necessary but then again, the EX5 would have little character without it. Perhaps that was why the choice of blue in the standard version was chosen, in order to make it different.

Yamaha also brought back the bevel shape between the front panel and the keyboard section as done on both the DX7 mk2 and all the SY synths (except the SY85). The bevel on the EX synths however is significantly larger than ever before.

The EX5 maintains the same large smooth and flat expanses of metal as with both the SY and W series synths. However, the EX5 does somehow feel stronger in build as if the metal and plastic is thicker. We think this is an illusion created by the thickness of the machine and the stepped layering seen on each corner.

While the screen has not increased in size to be more competitive with KORG and Roland it does seem brighter and more clear with a yellow colour that is reminiscent of the DX7 mk2. All the controllers feel excellent and affirm quality.

The EX5 feels great overall. It’s well built and has an air of confidence about it. All the buttons feel nice to press and when we studied them closely they appear to be sized like those on the SY99 with texture from the W5 with a wavy shape added on top- a proper design evolution. The alpha dial is minimalistic and sits with just a slight protrusion from the surface. In fact its the same design as seen in the VL1 and VL7 synths from 1994.

While we think it should be larger the screen is nice and we are glad to see that Yamaha finally decided to make those tiny “F” buttons immediately below the screen a little less tiny than those on previous generations.

Yamaha introduced round controller knobs with their CS series and we think its good that they were carried over to the new flagship synthesizer. Those on the EX synths are slightly larger and feel both smooth and weighty.

At 20kg this was Yamaha’s heaviest synthesizer to date and while not as long as the W5 that came before, it is almost a whole centimetre thicker. Those bulky ends are not easy to hold or grip like most previous models so this is not an easy machine to move around. We warn that it’s a risky one-person task given its weight and size.

Many EX5 owners are reluctant to get rid of their machine even though they are over two decades old. They are solid beasts that are still very powerful. Good examples seem to hold their value and this pushes the Silver versions up further. A good EX5S is a great investment in our opinion because it is both rare, and still highly usable. It’s not as beautiful as the DX7C but it still unique and marked the new Millennium. We are confident that it will only appreciate in value over the next decade.

The EX5 was the true successor to the SY99 and puts the W5 (that replaced the SY99) to shame. Its big, heavy and not too exciting to look at, but worthy as a flagship. Yamaha did do their best to meet expectations and built a flagship synth that summed up all their best knowledge and technologies gained over the last decade. In way it remained true to Yamaha’s design ethos, to  keep what worked and improve what didn’t. The Volume slider for example is still the exact same design first seen four generations earlier in the DX7 mkII. Perhaps it was a sentimental gesture or maybe good design just perpetuates? The “Swoosh” which seems purely decorative might also have been a nod to the VL1 which lends  technology to the EX and also had a curve in its end panel design.

Our biggest frown with this machine is that Yamaha didn’t try to make more of it as a special edition. It is still labelled as just an EX5 on the front panel with no “S”. Its known as the Millennium edition with no sign of the word “Millennium “anywhere. Apart from the colour and Logo placement on the rear panel there is not enough to make it a real special edition.

The manuals came in 3 languages and were rather colourful.

Stickers to put on the top of the machine to help identify location of ports on the rear panel. The EX5S had matching silver stickers.

The EX5 came with these 4 demonstration disks, sealed mint in plastic sleeves.

The EX5 also came with this Sound & Utility CD-ROM

The EX5 could expand it’s memory with this optional accessory.