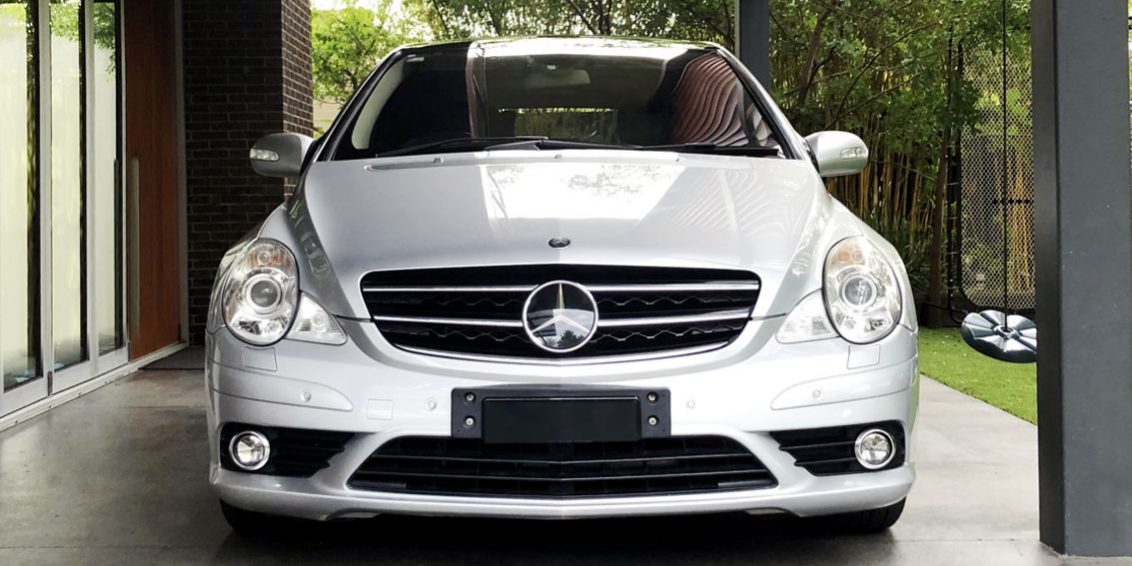 Interesting and factual information may be provided, but our review aims to deliver insight into the eyes and mind of designers.

The R-class was one of Mercedes few one hit wonders produced from 2006 to 2013. Intended as an MPV (seven-seater) it was also designed as a balance between a coupe and an SUV.  A family car that was not just practical but one that could feel energetic and sporty.

The R-class has remained a one hit wonder due to poor sales which was unfortunate considering the effort and investment into its development. It’s possible that Mercedes tried to roll too many ideas into one and making it a jack of all trades, but in the end confusing the consumer. As such the R-class was produced in relatively low numbers by modern standards. At the time of writing this article there are many available for sale since even the youngest ones are nearly a decade old and changing hands. Most are finding new homes with their second or third owners who will probably work them into the ground. These cars are solid workhorses so min low km examples are quite rare. Considering the high price when new, these cars are amongst the cheapest Mercedes on the used car market, and good value per size/quality.

While the R-class may be considered a financial failure, it was popular in China where it remained on sale from 2014-2017. The rarest R-class was the R63 AMG which was only made in 2007. With only 200 units said to have been built, it is considered even rare amongst all AMG models. As with most Mercedes cars, they received yearly updates but the most Significant change came in 2011 with a major facelift, which literally changed the face of the car. The R-class in this review is the top of the range Australian delivered pre-facelift car.

You don’t look so big to me.

The R-class is relatively unassuming at first, which is testimony to its well-balanced looks. Initially it appears like a sporty SUV, but with an interior and boot space to rival vans, you start to realise it’s more like an MPV.  From the side it seems low to the ground, though it can raise its suspension. This is where one starts to get a little confused. It’s a smart looking car, that’s big but looks small, so what exactly is it?

The R-class is relatively unassuming at first, which is testimony to its well-balanced looks. Initially it appears like a sporty SUV, but with an interior and boot space to rival vans, you start to realise it’s more like an MPV.  From the side it seems low to the ground, though it can raise its suspension. This is where one starts to get a little confused. It’s a smart looking car, that’s big but looks small, so what exactly is it?

Vents on top of the bonnet fit neat and flush but look a bit like a domestic air-conditioner grill.

The small triangular lamp could have been better conceived, and Mercedes completely redesigned the lamps for the facelifted model.

It’s from within that you really get a sense of how large the car is. The car is wide, and you almost feel like you’re in the cockpit of a flying shuttle. The R-class was intended as a luxury car and when new was considered plush and well-built. Leather and walnut surfaces with small chrome trimmings echo back to luxury cars of the 80s. The centre console is a large squarish oval that almost looks suspended as you would expect in a spaceship. There are a lot of curved lines and forms flowing and connecting together for a very organic modern look. In our opinion the curved lines and layering on the dash top is a bit excessive and ugly.  The avoidance of straight lines does however assist in the car’s sportiness and slender looks. As the top of the range model this car has almost every option including distronic which was very advanced for 2009.

Protruding frames for 3-D looking cluster, but hard to clean in between the gaps.

Hanging under the main dash for a suspended appearance.

These cars were built primarily as family cars and are design to withstand children, pets and adventurous holiday drives. Internally there is probably more plastic than we would like, but the quality of it is a big improvement over other Mercedes models that suffered greatly from the Daimler Chrysler merger era.

All upholstery is genuine leather (we are told) but its neither thick or plush. In fact, it borders on feeling like a synthetic material. The small appointments of chrome will fool most people to feeling classy but apart from the internal door handles it looks and feels like plastic to us. It’s a good interior, that may be step up from other brands, but nothing amazing in our opinion.

The V8 in this review has all the power you’d want in a family car. For a seven-seater it’s very fast and handles well for its size. Its low front skirt will likely scuff on speed or parking bumps, and that is why Mercedes added a raise a lower function which allows the car to ride higher at low speeds, and avoid scratches when parking. The seven seats are easy to adjust but it does lack the automatic electronic push of a button feature found on the GL models. Nevertheless, the car is spacious and with its air-suspension extremely comfortable. Its smooth and quiet ride is perfect for passengers to snooze on long rides into the countryside. The sound system on this particular car is excellent so while passengers in the back are relaxed and zoned out, the driver can enjoy a duet between the V8 engine and their favourite 80s driving track.

As a one hit wonder the R-class has its own unique place in history but at heart it’s a family car and likely to be seen as a clever MPV. MPV’s are not known to be desirable or collectible and as such there will be many better cars as an investment. Having said that the R500 is a rare beast, so for someone speculating, this V8 could be a small investment that can serve as a very practical daily driver. A low km, well-cared example is rare so if you find one and look after it you could have something special.

Most Mercedes go from being a modern classic around the 25-year mark and from there they often turn into proper classic. The very rare R63 AMG would have to be one worth keeping as a future classic, though we’ve only ever seen one for sale in Australia in recent years.

The R-class is one of those cars that is easily dismissed, and from a design perspective you don’t want to like it. It’s big, boring and at first seems like a disguised seven-seater MPV. Unfortunately, it’s not that simple, and the effort Mercedes designers put into this car became evident in our review. Most details were intentionally conceived to look not boring, big or like a typical MPV, and Mercedes were successful. We have to congratulate them and while the score was only 6.0, we doubt there is another SUV of that era able to score higher. We think the facelift in 2011 actually worsened the look to be too domesticated, so our preference is the pre-facelifted R500 in this review. If you have the space and spare cash, it would probably be safe to speculate on a low mileage R500 or AMG if you can find one. Otherwise, just admire then from afar as the better designed people movers of the 2000’s